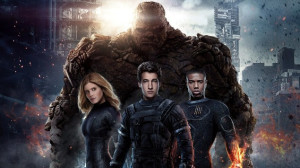 Four a few months ago. My initial reaction was one that I’ve had more than once previously…something to the effect of, “Didn’t we just do that?” At the same time, it seemed to hold some promise…a darker take on the story of Marvel’s First Family could help to balance out the campy side of more recent attempts to place these heroes on film. Of course, darker can be a problem, because it seems that the trendy way to make super-heroes relevant again…as in Man of Steel…is to make them…darker. Nothing like some gloom, shadows, angst and avoidance of primary colors to achieve relevance, or so it would seem.

And so, I played the flirtatious game of cautious hope that I’ve played with many super-hero films. I became excited when I saw images of the Thing for the first time, I read the interviews explaining the very non-canonical choice to cast the Human Torch as African-American (which worked quite well, I think). The lengthier the trailers as we neared release, however, the more concerned that I became. Mr. Fantastic looked to be about sixteen (a suspicion that turned out to be not far from accurate), and the overall pacing of the trailer left me concerned. There was much, it seemed, that could go very wrong with this.

I was pleasantly surprised recently after having similar suspicions about another movie. I was hoping that this would be the case again. Alas…

Josh Trank can do better, and, because he contributed to the writing as well as directing this film, I think that the blame rests there. I liked Chronicle, but Chronicle was a YA story. And, while I will fully admit that I don’t particularly like YA, I do respect it as a genre. It’s just that the Fantastic Four has no business being YA. Reed Richards is a respected and published scientific authority…that is, an adult. His character, at least post-acquisition of his powers, just doesn’t work as a teenager, no matter how you write it.

What I think Trank missed entirely in the film conceptually is the family aspect that makes the Fantastic Four so different from every other super-hero story arc. While there is a (forced and completely unrealistic) attempt to develop Reed and Ben’s childhood history together, the relationship between Reed and Sue never develops, and is reduced a brief scene of laughter as the two work together in the lab. Connections between Johnny and Reed are passing and rushed, and none exists between Ben and anyone other than Reed. Robbing the story of these relationships reduces it to a one-dimensional trope of people given extraordinary powers. The compelling through-line to the Fantastic Four is the worldview that their family relationships brings, the manner in which it leads them to interact with the crises that they face. Before they are heroes, they are husband and wife, brother and sister, best friends. Fighting to keep their family intact is often the more triumphant battle than those with Dr. Doom of any of their other rogues’ gallery.

Should the writer manage to keep these family relationships intact, then a lot can be done, but he didn’t, and so everything else fell apart. Instead of traveling to space and experiencing the accident that gives the group their powers, they travel to another dimension. This can be accepted as artistic license, and likely could have worked, except that Doom accompanies the group instead of Sue, and they all go…drunk. Their transformations in no way parallel Sue’s, leaving a strong female character as an afterthought. If there is a more egregious mistreatment of the story than weakening a strong female character, it is making the villain flat, unconvincing, rushed, and generally without substance. I guess I don’t have to say anything further about Dr. Doom. His character would be funny were this movie intended as a farce.

The story is rushed, lost in its mis-guided attempts to re-invent an origin story, leaving no room for the group to develop as heroes. This is especially true given the very non-canonical twist of the group being drafted into military service so as to have their powers weaponized. This couldn’t be more out of character for the team as they are written in the literature, but those original characters obviously aren’t of concern here. We’re working with a group of unknown kids with the same names and powers as the team well-known to comics readers, but not the team itself.

Apparently, that’s okay, though, as long as we make it dark and moody.

The climactic fight between the “heroes” and “Doom” is rushed and poorly scripted, the visual effects lackluster and bordering on cliche. The rare moment of brightness in the film is that some of the actors, specifically Kate Mara and Jamie Bell, give solid performances, managing to wring some life out of a script that felt as though it were thrown together in a weekend.

The logo of the “4” never appears on the costumes of the characters, and that is appropriate, because whatever this is…a group of unlikely geeks and misfits banding together through fate in good YA fashion…it is not the Fantastic Four. It seems that every Marvel film coming from Fox is destined to be a tragedy lately. The Fantastic Four is no exception. If you haven’t seen this, don’t bother. Go read some of the comics instead.