I’m oversimplifying a bit perhaps, but I see two general schools of thought regarding how to be creative and make a living.

And I’m reminded of the poet (whom I can’t remember) who said that the only thing worse than having a job is not having a job.

I can only speak for those of us who write, but I imagine its the same for anyone with a creative bent. I used to complain a lot. The reason was that I worked in a profession that didn’t permit a great deal of creativity. It was also a profession that was better suited to extroverts (I’m very much the introvert by nature). I came home quite exhausted at the end of the day, and it was all I could do to force myself to put down any words somewhere between dinner and bedtime. One of the reasons for my career change, I reasoned, was to allow more creativity into my day-to-day so that I would be more creative in my free time to write.

Now, I am essentially a creative problem solver Monday through Friday. I write the code that makes things on the web work. The issue is that the technologies with which I work require a great deal of time to remain current in one’s knowledge as they’re always evolving, and thus I do the same work a lot in my free time, as well. I know, you’re thinking “all work and no play.” Sometimes, though, the work is the play.

In retrospect, I was very wrong to complain back then. Being able to think outside the box and solve problems creatively each day is great, especially when I get to do it in the context of something as socially, politically, and interpersonally transformative as the Internet. Sometimes, though, when I have free time at home and want to get the latest short story idea out of my head and onto “paper,” I find myself with a very different problem: my creative juices are tapped, the muscles sore from being put to good use all day.

So, all that to say that each day job held and holds its own challenges. Both make me just as tired, but in different ways. The moral to my brief account, if there is one, is to not complain about one’s circumstances, because, as Karen would be quick to point out to me, the grass isn’t always greener.

And, while I’m not complaining at all about my current field of grass, the other moral to this story is that writing (as well as any other medium, I’m certain) takes just as much discipline now. I have to be intentional about making the time, intentional about practicing the discipline. That intentionality is key, and my impulse to think that the need for it would be offset by a new career was very misguided.

Anything creative is work. Hard work.

Here’s to those doing the work.

Running with the theme of letting the imagination run with ideas, I remember something that an old friend once told me. I was frustrated then with having little time to write (ironically, I think back to that period now and wish I had that much time….funny how everything is relative that way), and found what little creative spark I could find squashed by my day job. That was before I had been able to find the interdisciplinary melding points in what I did, and I was looking for some way to let everything fall into place.

His advice to me was to let everything be “grist for the writing mill.”

It was difficult to take his advice then, but in the years since, I’ve began to appreciate his wisdom. One of my resolutions for the new year (or was it the year before…?) was to make time to work on some side projects, projects for which I had good ideas but have never set aside to time to truly develop. Those sorts of projects, I think, are the best sometimes for getting the writing spark lit. As Karen and I have had some quite interesting experiences with living arrangements over the past year, I remembered a shelved project that has been sitting on my desktop for a bit. It’s a collection of humorous experiences that we’ve had at different apartments since we’ve been married. It’s one of those projects for which I’ll very likely never seek publication, but that’s worth compiling if only for a family memoir of sorts to be a source of good memories later.

Or, perhaps the adventures that I recount there will end up on these virtual pages. Who knows?

I think that I’ll carve out some time in the next week sometime to outline some of our experiences and begin writing them down. It will get me back in the frame of mind in which words are flowing out onto the page, at least, and that can lead to all sorts of wonderful things. 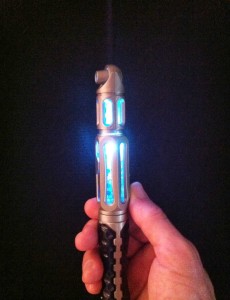 Karen gave me a sonic screwdriver for my birthday.
That was a couple of months ago, and I’ve been carrying it around zapping things that won’t work ever since. When I have an obsessive compulsive issue and begin worrying that the door isn’t locked securely, I’ll use the sonic screwdriver, because everyone knows that when the Doctor fuses a lock with that gadget, it stays locked.During the move, Karen shook her head at one point and referred to it as my security blanket.
Don’t judge.
This isn’t a reality distortion field, it’s just letting my imagination run a bit. It’s healthy, I think, letting yourself engage in the “what if” sorts of fantasizing that leads to good storytelling.
Over the weekend, I drove by a dark green Hummer that was parked on the curb. In true Bostonian fashion, the license plate indicated that it was a “Green Monstah.” I glanced at it in my rearview as I drove by, and pretended that I could hear it rumbling, the monster beneath pawing the ground to be let out and wreak its havoc at its master’s bidding. Or, perhaps it was a Decepticon-like evil transforming robot that would morph into its true shape to leave collateral damage in its wake as it carried out the mission known only to itself.
As I said, I don’t permit myself to become absorbed in these fantasies at the expense of reality. I will let myself dwell on them when I have some downtime, or when I’m laying in bed trying to fall asleep. This is the stuff from which good writing is born.
What I don’t do is let myself run with it enough. Part of that is a timing thing, but part of it is that I tend to get so bogged down in the tedium of finishing a project that I’m stalled on (like my novel), that I get stubborn and won’t let myself take a break to write other things. The truth is that letting those creative impulses flow uninhibited for even a little while flexes the creative muscles. Just writing this stuff down, without structure or a plan, just to see where it could go, is an excellent exercise, and could turn into an excellent story in its own right at some point in the future.
Being observant of what’s around us is part of what makes a writer a writer (or, for that matter, makes an actor an actor). Letting yourself do something with what you observe, though…that’s where the discipline comes into play, and its that discipline that I’m hoping to cultivate in the coming months.

I had promised some more availability details for my short story, “Diaspora,” which was recently published in eSciFi Magazine. While previously available only at Barnes and Noble, the issue is now available at the magazine’s website in a variety of formats, including Kindle and Nook and even good old fashioned PDF. It’s also available directly from Amazon, as well. I’d love to hear what you think of the story!

Update in 2019: The magazine, sadly, is no longer in publication, so I’ve taken down the links.

Several years ago, I was working on a play. I had written the script, and was attending the rehearsals periodically at the director’s request to consult on the production. Seeing something that you’ve written go through the rehearsal process is always…odd. Hearing an actor give voice to the words that you’ve written, to the character that formed in your head, can be simultaneously exciting and disconcerting. You really have to try to separate yourself from how the character was saying those lines in your head, because there’s a completely different aspect to a performed piece than to a piece that’s only read by your audience.

I remember walking into the auditorium one night late in the rehearsal process, looking up on the stage, and seeing my character. I’ve always called that moment the “spark.” It’s the moment in which I stop believing that the person on stage is the actor and begin believing that it’s the character that I’m seeing. For the actor,  it’s the moment when the character takes over…also simultaneously exciting and disconcerting. When it’s your character that you’re seeing and in which you’re believing…well, there’s something holy about it at that point, as well.

I’ve never had cover art drawn for anything that I’ve written. My work has always been published in magazines, journals, or the like, or on the web. I recently arranged with a colleague to have some cover art drawn for two short stories that I’ll be self-publishing in the near future. I confess that I briefly considered attempting it myself, but, some shaky Photoshop skills aside, I’m no graphic designer. I decided to leave it to the professionals, and I’m excited to see the result.

I’m excited because I was laying in bed a couple of nights ago re-reading a book from my childhood, when I realized that the way I was viewing the protagonist…the way that she sounded in my head, even…was directly connected to how she appeared on the cover of the book. There’s an interesting connection there, the way in which one art form informs your interpretation of another. I wonder how I would have “seen” that character if the cover art had been different? I wonder how much differently I see characters in books that do not feature a character on the cover?

More to the point, I wonder how I will react when I see one of my characters on a cover? Will they look the way that I envisioned them? Likely not, and neither did the character in my play years ago when I watched her come to life…as I have many others through the years…in the skillful hands of that actor.

Writing fiction involves, by nature, more description than playwriting. I generally spend a couple of paragraphs describing a character’s appearance, what they’re wearing, their body language, etc., the first time that they appear, and re-visit at least general appearance at key scenes later in the work. When writing a script, I may make mention of a clothing item critical to the scene, but I intentionally leave a lot of things blank, because they’re up for the director and actor to fill in. It will be interesting to see how a designer fills in the fewer blanks left by fiction, but I think that it will be very similar to releasing that character to be interpreted by an actor and director. Because, as with all art, there’s a subjective element to it. The designer will see my characters differently than I do.

I can’t wait to see how it turns out.