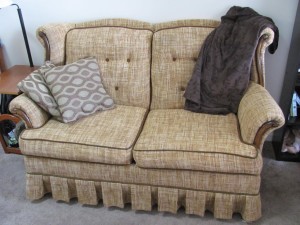 A couple of years ago, I received a package that we had ordered. I always separate out recyclables from packing supplies, and make certain that things like cardboard boxes and random papers avoid the trash bin. That particular package had arrived in a cardboard box with a web address printed on it that allowed you to track a re-used cardboard box. The idea was that you would be able to see all of the extended life it received through re-use, and thus how many new boxes did not need to be made. A fun concept, I thought.

Sometimes, I wish that I could watch items that are important to our lives as they progress through their existence. There are things, for example, that weave in and out of our lists of possessions that manage to carve out nostalgic slices of our memories, but that we don’t hold on to when we downsize for whatever reason.

My parents had this sofa and chair when I was a child. They had very likely purchased it when they were first married. Imagine everything that was the 70’s, and you would find it encompassed in this sofa and chair. I don’t know this for certain, but I sort of imagine that they were my parents’ “starter furniture.” A few years later, of course, better furniture was purchased, but the sofa and chair simply migrated to a different room…a “spare room,” as it was called, that switched identities on a regular basis. That sofa and chair, as I recall, stayed with that room through its incarnation as a study just after it had given up its role as a guest room.

I went to college…the furniture was still around. It was covered and altered in appearance, but still there. Soon, the sofa wasn’t so comfortable any longer, but I slept on it once while visiting.

When Karen and I met during grad school and announced our wedding, we began searching for an apartment. Until that point, my bachelor apartments had always been furnished. Now, for the first time, I was looking at the prospect of furnishing an apartment while we were both poor grad students. My parents graciously offered to supply a sofa and chair for our living room. Guess which ones they brought?

Last year, as we were packing our apartment for the move to New England, we were deciding what to sell instead of move. Downsizing, as I’ve said, is a very liberating experience. We, too, had acquired another sofa since we had received the gift of that starter furniture, and now, we decided, the starter furniture had to move on.

That sofa and chair had witnessed my childhood, and witnessed the early years of our marriage, but now had to move on to new adventures.

They didn’t stay together. The chair went to a grad student’s apartment because she had eclectic tastes in furniture. The sofa was a perfect fit for an admissions counselor’s office at a local college. They went their separate ways. Sort of sad, actually, but their adventures are continuing.

Sometimes, I wish that I could look in on them and see how they’re faring.

Silly, I know, and I’m not nearly that sentimentally attached to our furniture, don’t get me wrong. I just think that it would be interesting to personify various things…that small table, or decoration on the wall, or a bedside stand…something that has come through our lives on its way elsewhere…and see what adventures they see, hear what stories they could tell.

In the interest of pointing out how valuable a fine arts education can be in “real life,” here’s a couple of practical ways that being (among other things) a theatre major in college helped during last week’s move as we trekked our life in a moving truck up the East coast.

2. Changing from work clothes into a suit for an interview in a small bathroom in under two minutes.

3. Determining what type of plywood would be necessary to fix a furniture issue after moving in.

4. General improvisation when the entire schedule for the day begins to closely resemble a train wreck.

See? Who says an arts education isn’t valuable? And the adventure continues…

I was a guest blogger this week over at Canamgirl’s Blog. Many thanks to our Canadian friend Renee for letting me post! Go over and check out the story of our weekend misadventure.

If I might have a moment of your time, permit me to make my case.

I. I caught my share of virtual grief from Facebook friends today. It was the “first snow” of the season in Virginia. Soon after waking, the white stuff began to dust the parking lot outside, and everyone just seemed so happy about it. I wasn’t. I dared to tweet my unhappiness. Thus, the grief I received. You’d think that, because I don’t like snow, I was un-American or something.

II. This leads me to the observation that one tends to enjoy whatever weather patterns or climate that they might have seen themselves as having been deprived of during childhood. Several of those friends who booed my virtual opinion are those who grew up in areas that saw little to no snow. Conversely, I was forced to deal with nasty North Eastern U.S. winters my entire life prior to 5 years ago. I moved south, in part, to escape snow. While there is obviously still some snow in Virginia, there is significantly less than I experienced during my childhood. If I might be blunt, however…any snow is too much, and if I never saw the stuff again I could die a happy man. I guess I should have moved further south.

III. Is there any worse feeling than being cold? I suppose I might concede that there could be some fleeting beauty in white stuff falling from the sky (usually lasting about 10-15 seconds before it  fades), but as soon as I stepped into the breezeway outside of our apartment today, the cold sliced through me and I wanted to retreat. Then followed the headache of negotiating traffic on wet streets, and being pelted by snow/rain/nastiness immediately upon stepping out of the vehicle, not to mention dragging soggy wet winter into the floorboard of the car with you when you get back in. Seriously, someone tell me what’s good about this? And don’t even get me started on how much longer it takes to do laundry in the winter!

IV. Snow is accompanied by dreary, grey skies, punctuated by bare tree limbs that scratch at the light-less canopy with their naked, tortured bodies (Did that sound nihlist? My bad). In all seriousness, I suffer from what was previously labeled in the psychological community as “seasonal affective disorder.” While the diagnosis technically does not exist in the current incarnation of the DSM-IV, it remains a very real event for me. Take away my sunlight and leave me trapped beneath perpetual dusk, and I get depressed quickly. This began occurring in college, and has grown progressively worse since. So, realize that my opinion comes through the lens that snowy weather really is not a pleasant emotional experience for me.

V. Disliking winter (I really have no use for the season at all) does not make me a “scrooge,” as I fully recognize that snow is not a pre-requisite for “getting into the Christmas spirit.” If anything, in fact, it probably hurts that process more than it helps it for me.

VI. Incidentally, I’m more into observing Advent than the materialistic mess we’ve morphed the holiday of Christmas into, anyway, but…that’s a post of its own.

VII. So, might I present a modest proposal? And not even nearly as bleak as other proposals of that identification have been. You see, I think there’s something to this whole “Christmas in July” concept. Why? Because there’s light in July. Besides, if my studies served me correctly, Christ’s birth likely didn’t happen in the winter, in any case. And light, my friends, is the source of much spiritual imagery in the Scriptures. Recognizing that light was such an important poetic symbol in religious writing, I find it ironic that we observe Christ’s birth at a time when sunlight experiences a very notable absence, and we feel forced to compensate by stringing electrical lights around our dwellings in a losing battle to offset the cold and grey appearance of death that we face outside as most of the greenery has fallen and the ground become hard (I know, I know…there I go being nihilist again). So, I say, let’s observe Christmas in the summer, and all find warm places to go for vacation in the winter. It makes more sense anyway that you would want to travel from somewhere cold to somewhere warm in December, as that would entail the sense of escape that a good vacation should have…instead of just moving from warmth to warmth. Let’s learn a lesson from birds, here, shall we? Migration just could be the answer to many of our ills. This way, everyone experiences more sunlight and its vitamin-D-produced happiness year ’round, instead of just bingeing and purging in our existent lifestyles. And that whole ridiculous mythology about an obese gift-giver finding his way down your chimney? Well, that can be conveniently re-written. Now, he can just leave things by your pool instead.

Besides, I’ve always thought palm trees had such a pleasant look with Christmas lights on them, don’t you? Replace the eggnog with little drinks with umbrellas and…well, now we’re onto something! Then, those of us who suffer from November to March would have such a great reprieve from the mess, from the weather delays for holiday travels (I sat in an airport for 7 hours on Thanksgiving day due to fog…how did you celebrate?), and an all-around more pleasant disposition with all of the sunlight we would enjoy.

Yes, I’m convinced. This whole “Christmas in the winter” tradition is just over-rated, and due for a change. Let all of us who have been called “Scrooge” unite and champion the Christmas-in-July cause! Our hearts aren’t two sizes too small…its just that our thermostat is set a few degrees higher! Down with tradition, retire the reindeer, and place Santa in a private jet that flies to different resorts. That suits the privileged version of Christmas better, anyway, and results in more profits for the beginning of the fiscal year…just starts things off right, right? More sunlight, more money, more distraction from the holiday’s true meaning of Life, love, forgiveness, and family…this plan should go over big.

A perfectly good alternative to having to deal with the difficulties some of us face during winter? That’s for the reader to decide.

So, permit me to wish you Feliz Navidad. Especially so if we could all just be warm and dry.