Last weekend, we celebrated our youngest daughter’s birthday. I’m still slightly amazed at how old she is, but I think that’s a fairly universal experience among parents. When we asked what kind of party she wanted, she immediately decided that she wanted a Toy Story party. This wasn’t really a surprise given that it’s become her recent Disney + binge (don’t judge us…pandemic…). So, we ordered the supplies and scheduled a (very small and family-only, given the circumstances) birthday party. The party was delayed, though, because of New England weather that tends to mock such plans, and so we actually celebrated twice: the original date was just us, some cake and gifts from grandparents who were diligently on FaceTime to observe, and then the girls, of course, wanted to watch Toy Story. Because Forky was the subject of the day, they wanted to watch Toy Story 4, in which this character is introduced. So, we had some cake, and sat down to watch.

Permit me to pause here and describe what I know about Toy Story. I knew that it’s been around for a while, because I remember seeing the first move in theatres not long after I had finished undergrad. I didn’t appreciate how long ago until I looked this up and did the math. The original Toy Story was released nearly 25 years ago. So, first off, it’s enduring, and secondly….I’m old.

When my daughters began collecting toys from the movie, I knew there had been more than one, but figured it was one of those things in which Disney was just making more to continue to cash in on the first movie’s success. When Karen and the girls were visiting family out of state a couple of summers ago and she called to say they were headed out to see Toy Story 4, I remember replying something to the effect of, “Sheesh, there are 4 of those? What else can they do with that plot?” And that was the extent of my knowledge of the franchise.

Watching the fourth film, and then later that afternoon others in the series, with the kids, made me realize why. Sort of like Star Wars if you’ve ever tried to catch up on that universe, there’s a lot to Toy Story. And it’s actually really interesting. They’ve developed these characters over the course of the films, but there’s more there than just that.

I recently watched some of the documentary series The Toys That Made Us, which was like re-living childhood to me. Those toys…Transformers, G.I. Joe, He-Man, Star Wars…so much of that defined my childhood in so many ways. At first blush, it was that I was a collector, just as my daughters are becoming collectors now, but it’s more than that. When I think of those toys, and playing with them and opening some as Christmas and birthday gifts, I don’t so much think of the toys themselves. I think of my childhood, of the blessed journey that I had through my early years, the way that I was loved by my family and learned what family is about. I think of my parents, and what they did for me through those years. I’m motivated to give that love and support to my children, to provide for them as my parents did for me, to give them the most amazing childhood that’s within my power to give.

I ended the day of that small birthday party wistful. A lot of those toys that I grew up with as a child are still with me, either in storage or on display in my office. Many of them are invaluable to me, but not necessarily as objects…as symbols. When I think about those toys, or go through my old collection of them, I feel love. And I want to give love to my children. Love, not just stuff. These toys are serving as a symbol, in that they point to something larger than themselves, participating in that larger reality.

Part of what makes me enjoy Toy Story so much now is that it’s really a sort of love letter to those toys from my childhood, and all that they represent to me in adulthood. They manage to capture this experience that I’m having as an adult looking back, while looking at the present of my children. There’s a genius in the writing. I can’t help but think that these toys will be with my girls when they’re my age, perhaps sitting on a shelf on display, and that they will remember the loving home in which they spent their childhood.

That is my prayer.

To infinity, and beyond. 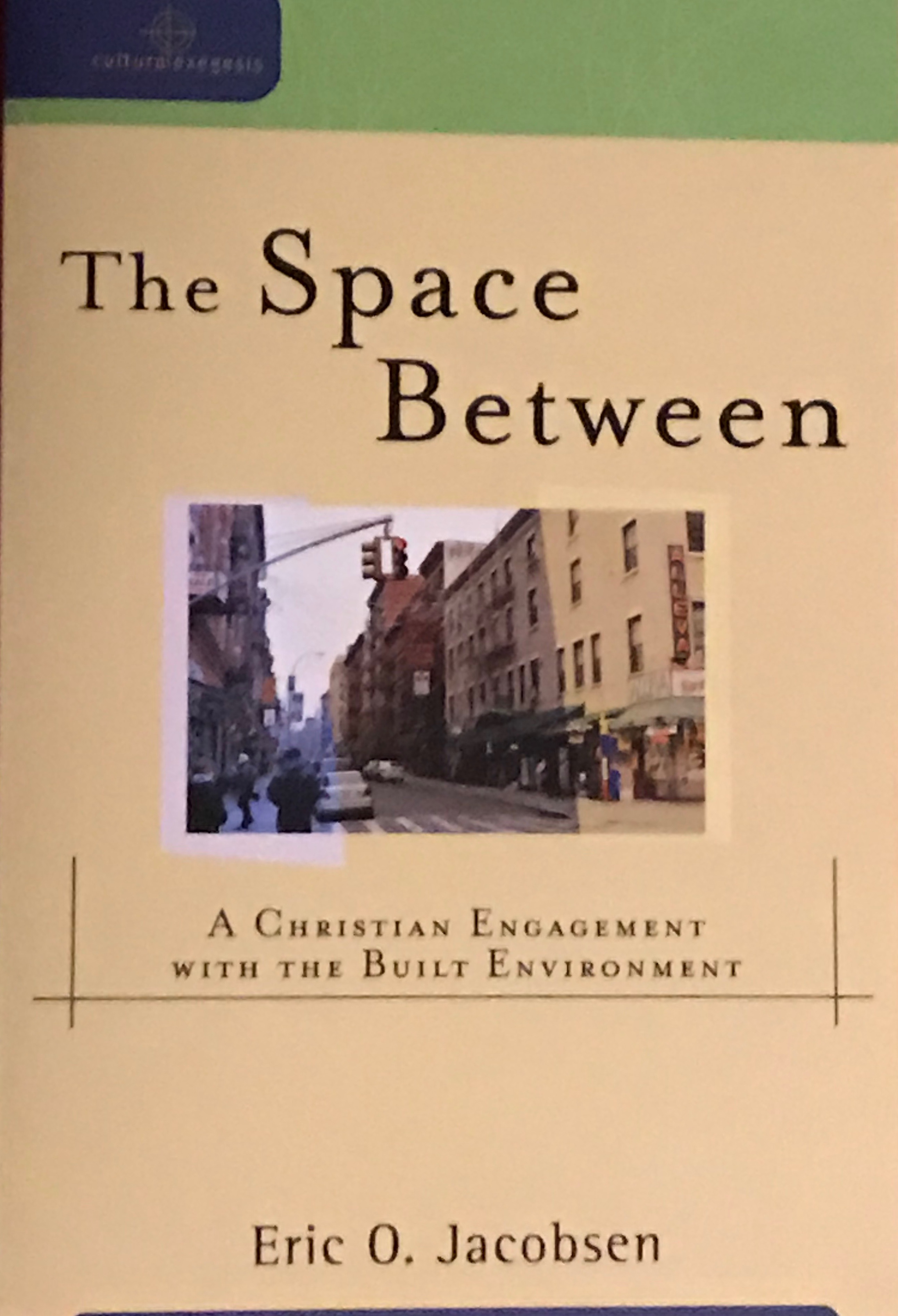 It’s funny…or perhaps sad….how the academic sorts of reading that I pushed through in grad school is now attractive to me as reading in my spare time. I suppose that, by the time I was reaching the end of my master’s program, I was sort of just realizing my true passions. Around that time is when I became fascinated by theological examinations of culture. I’ve also always been attracted to more urban lifestyles, so a theological examination of urbanism….or, more precisely, new urbanism…was bound to pique my interest.

The Space Between, while a dense read and obviously an academic text, is engaging from every angle. Jacobsen begins with detailed examinations and explanations of the disciplines of city planning, urbanism, and new urbanism, taking the reader into an exploration of how sidewalks fall into the design of a city, how sight-lines should terminate on an urban horizon (particularly fascinating if you have any background in theatre), and other minutiae of the process of laying out an urban environment that will bring enjoyment to most readers simply by exposing them to the knowledge of a field of which most of us know nothing. Then, with a firm understanding in place, we dive into the theological examination of urban spaces.

A foundational premise of Jacobsen’s work is that public spaces are intended for use, but are activated by use. He is intentional about defining his subject as the “built environment,” separate from the natural environment but existing alongside. This is the environment with which we engage and that is more than just buildings and streets and shops, but includes the in-between places…alleyways, the spaces between buildings, and parking lots…all of which have an effect on our lives. Interestingly, as I read this, I remembered several foundational events in my life that took place against the backdrop of parking lots.

Another of the author’s primary assertions is that the industrialized transition from a pedestrian society to an automobile society de-humanized our interactions. Streets no longer accounted for walking after the industrial revolution, but were built to accommodate automobiles, instead. This pushed our interactions out, away from homes that we previously could walk by as we traversed our environment and potentially interact with neighbors, yet now we are all walled off in our vehicles, not only limited in our interactions with one another, but tending to view each other as less than human as we are encased by steel.

Zoning laws (something that the author is firmly against) then moved homes and businesses apart, disadvantaging many because a vehicle is now required to do even the most mundane of tasks in many places in our country. Public transit is generally not a priority. A by-product of this, the author describes, is the “safe haven” philosophy, a relatively recent evolution in Western thought. In this philosophy, we view our homes as safe havens within which we can isolate ourselves from interaction with the world. The practical upshot of this is that Christian influence in our communities and the public sphere (or, at least, meaningful Christian influence) has diminished. We no longer have to engage with our neighborhoods, and often don’t. Our children don’t learn how to do so as a result.

The way to effect change in the polis, Jacobsen argues, is to engage the neighborhoods in which we live. When problems arise, engaging with other and working them out, instead of immediately calling the police, for example. I can’t help but think, as well, that this reduces the need for excessive law enforcement in our communities, and just may, were it to become a common practice, divert us away from our march toward a police state, as well.

Jacobsen goes on to describe a church liturgical interface with the built environment, which I won’t outline here as it is lengthy, but it is compelling.

For all of the author’s excellent points, he is absolutist in his framing of his theological engagement from the standpoint that human dignity is only affirmed and protected when in a well-functioning urban environment. I find this to be strikingly short-sighted, as it ignores a large portion of our country that lives in rural environments. In these rural environments, not having an automobile (a state in which Jacobsen implies is closer to Godliness….I don’t entirely disagree, but…) is not an option. There is a sense that the author views rural environments as somehow lesser, which, for all of his thought-provoking points, is a perception that we can scarcely afford given today’s culture wars.

Still, The Space Between will change the way you view your engagement with your neighborhoods, working space, and others around you for the better. If your academic interests lean at all in this direction, or if this sounds at all interesting to you, then this is certainly a worthwhile read.