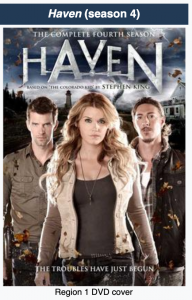 I’m always a week or five behind television serials, having “cut the cord” long ago and fitting the Hulu or Netflix viewing into my free time. All that to say, I just finished season four of Haven over the weekend. I’ve watched Haven since episode one, and I’ve been hooked since then. For those of you who don’t follow, the program is loosely based on Stephen King’s novella, The Colorado Kid. Set in a small town called Haven that is situated in Maine, a town that goes through bouts of supernatural affliction known as “the Troubles” every few years, we are greeted in the first season by Audrey Parker, an FBI agent who is in town to investigate both the troubles and the mystery of what happened to the Colorado Kid.

If you’ve never watched but your interest is piqued, spoilers follow.

We’ve watched with fascination as the supernatural tale of Audrey’s reincarnations has played out, as she searches for her identity and fulfills her calling to save those troubled in Haven from their curses. She’s the “good guy,” the superhero, if you will, to the town, one of a set of influences seemingly placed there by outside forces to keep the evil that is the Troubles as bay, to save innocent lives, to prevent the wrong from wreaking havoc on the right.

Except, in season four, the writers have taken Haven through a fascinatingly new twist in the story arc.

After Audrey seemingly sacrificed herself at the end of season 3 to save the town, we find her returning to a Haven continuously troubled this season, and with others following her back from her extra-dimensional journey, as well. One of these men is evil for the sake of evil, and claims to know who Audrey was before she was Audrey, or any of her previous incarnations. What is slowly revealed over the course of the season is that Audrey has not always been good…in fact, far from it. She and this newcomer, William, originally created the Troubles for the pleasure of watching others suffer, and Audrey is now returned to Haven every few years, without a memory, to save the town as penance for her past wrongs.

So, Audrey is still a hero…just of a sort of Ghost Rider nature, if you will.

The cliffhanger upon which we end season four, as I’m sure you know if you’re still reading, is that Audrey has been overcome by Mara, her original identity who is as evil as one might imagine for someone who made the Troubles, and makes her intention to save William, her true evil love, from the abyss quite clear.

Audrey, it would appear, is gone.

Now, she was gone at the end of season three, as well, but was brought back, and, while I was admittedly incredulous at first, the writers made it work. After all, heroes return from the dead all the time, as any comics fan knows. The writers actually wove quite an engaging web as we watched Audrey slowly re-appear, and I’ve been impressed with Emily Rose‘s range as an actor to give depth to the different incarnations of Audrey Parker as she has.

This time, however, the writers have taken us to only one end result that I can find: Audrey has to die.

I mean, really, though. She has to stay dead, too. It’s the only option.

The reason is the same that led me to be incredulous at the beginning of season three. While I can see ways to bring her back within this story arc, all of them would play a bit shallow, I think, and any of them would make this move about hooking the viewer and bringing in ratings. It would be about continuing the story in a similar formula to which the audience has grown accustomed, and wouldn’t move the story forward. The writers have taken the program in a brilliant direction this season, and have now placed themselves into a corner. They have to let Audrey die and the evil Mara continue, because to do otherwise would be untrue to the story. Television serials are notoriously flippant toward their stories for the sake of return viewers, as we know: House died a slow and miserable death, and Bones lost everything that made it worthwhile three seasons ago. What has to happen here is that Haven has to continue, but without Audrey, because the story is about Haven…just as she and Nathan place the good of their town before their own, so must the writers. The story about Haven needs to continue, and it must go on with Audrey’s death.

Not that I’m happy about this. I like Audrey Parker, and I’ll be the first to say that it’s unbelievably tricky to keep a program like this moving without its protagonist. Yet, that is the challenge that the writers now face. Given what’s they’ve done this season, I know they are up to the challenge. The question is, will they go the way that they must?