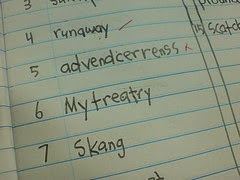 When I saw it, I sort of shook my head, grieved, and went on.

Which is progress, because there was a time, not all that long ago, when I would have raged against it, shouted at the heavens, and inundated every single social media outlet in which I participate to complain about it.

Actually, now that I think about it, I should probably be more concerned that my response was so tame.

The offending thing was in a legal contract that I was reviewing for a project in which I was about to be involved. Going through a binding legal agreement that was about to be entered into between two parties, every nuance of which held meaning and obligations to all parties involved…in short, a document which should never be entered into lightly…I saw it: a typo.

So glaringly obvious that it couldn’t have been missed. Except that it had, as though rushing the document out the door was more important than having someone proofread it.

And I’m going to assume that, had someone proofread it, the error would have been caught, because…well, because otherwise I would lose all faith in an otherwise literate universe.

I see it everywhere on a regular basis. Formal business emails, company blogs, articles…it’s almost as though we’ve forgotten how to use English. In fact, I’ve seen two in a novel recently. I’m more forgiving of that in a way, though, because at least I know that a line-editor has been through it, and, when faced with the daunting task of correcting 500 pages of manuscript, I have difficulty faulting anyone for missing an article.

In short, I believe that you can either do something fast, or you can do it well, but the two are mutually exclusive.

Of course, that mentality places me at odds with the driving premise of business today, because business accepts the gospel of time being money, and ultimately is concerned with money over quality. And, if you hadn’t noticed, everything in the U.S. is operated as a business, and the pressure to maximize time has grown exponentially in recent years. Which leads me to believe that more typos and more flippant disregard for this beautiful language of English that has served us so well for so long will continue to increase exponentially, because the time required to do something well will continue to be pushed to the side in favor of a quickly-produced, and thus more profitable, product.

So, in twenty years, we’ll have stopped teaching grammar (Karen’s experiences in the classroom indicate that we already have), and, though we’ll only be reading and writing like fifth graders, we’ll know all about how to make money. Lots and lots of rushed, expendable, unfulfilling and antithetical-to-beauty, money.

Such a brave new world, don’t you think?