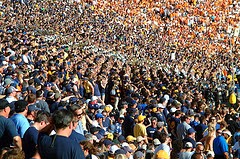 When I was deciding on a college after my senior year in high school, I shopped around. My grades were quite good but not the best, so it’s not like I had my choice of anywhere I wanted to go, but I did have some options. I remember looking at the big university in my state…it was down to two schools at that point…and ruling it out altogether. The reason was that it was well-known as a “party school,” and that wasn’t the vibe that I was looking for.

Blame that partially on the fact that I was the socially inept geek for a great deal of my life, perhaps. I sort of fit in better my junior and senior years, or so I thought, but in reality I had just fallen in with the theatre crowd, so it was just a different sort of geeky. Like it or not, I was simply never destined to be the popular guy with the striking date to the prom.

In college I was a loner a great deal of my freshman year. Partly this was due to the fact that I just didn’t fit in with that particular school (I transferred to what would become my alma mater at the end of my freshman year), but, for whatever the reason,I was the one who generally walked to class alone. My friends were the people with whom I did shows. Even after declaring a theatre major (what would be one of a few that I would declare in my five year plan), I didn’t really go to many parties.

By the time I was in grad school, I was the one in the library on Friday nights.

That said, there’s such a thing as too much fun…and I don’t mean that from a moralist point of view. This article about college athletes reading at a 5th-grade level last week was disturbing. Karen is an educator, and she has told me stories of college students so far behind in basic skills it made my jaw drop. She’s not the only one of my friends in academic professions to have told me those stories, either. That sort of makes me concerned about what it is that we’re emphasizing as a culture when we end up in this spot.

I have nothing against athletics, mind you…there was a time when my calendar was blocked off for the beginning of basketball season and I was in front of the television punctually. As horrible as I am with a tennis racket in hand, I very much enjoy playing.

I also have nothing against extroverts…they’re annoying sometimes and have too much influence on the way things are structured overall, but some of my best friends (and wife) are extroverts, and I’ve come to understand them.

I think the issue that’s presented in this article is a lack of balance…emphasizing one thing over another, one aspect of life over another, part of our collective personality over another. Where we end up as a result of this is frightening. I don’t want our daughter to grow up in a world like Idiocracy. I don’t want having read more then ten books in high school to define “well read.” I don’t want deep thought…critical thought…to become extinct. That’s a frightening potential world into which to look.

How to solve the issue? I’m no policy maker, and politics give me a headache. Behind it, though, is a cultural shift, a change in paradigm, in what we emphasize. I wish academic institutions would behave as schools, making academics primary and other activities, such as athletics, secondary. I wish we were less compartmentalized and more open to different disciplines talking to each other. I wish that we didn’t emphasize spectacle over substance.

In short, I wish there was a bit more depth to go around, because I’m embarrassed for all of us when these frightening stories become known.