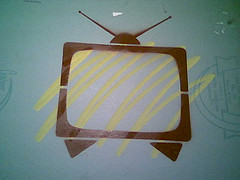 Do you remember Max Headroom? The artificial intelligence from “20 minutes into the future,” which was in a dystopian world in which huge corporations dominated and off-switches were illegal? When I look back over the types of science fiction that I experienced during my formative years in the 80’s, its no wonder I’ve developed a love for cyberpunk and dystopian science fiction. In fact, “good science fiction” and “dystopian” are practically synonymous to me.

When I think of a media-driven world in which a constant exposure to corporate-controlled media is a reality…that’s pretty dystopian for me. When I grew up, I remember when we first had cable television connected (I was completely stoked to watch Battle of the Planets). From that point forward, the television became more and more of a reality, a constant source of white noise that brought difficulty to the dinner table, sparked occasionally heated conversations in the evening, and was used as a litmus test for the fact that I needed glasses to correct my vision. Television had become such an integral part of my life, in fact, that, when Karen and I were married and combining our lives into one apartment, I remember her giving me a quizzical look when I included cable in the list of essential utility bills. She could live without cable. I couldn’t.

Of course, cable television has become a bit of a dinosaur now, just as landline telephones have for personal residences. Both industries struggle to survive, with only the fact that they are also ISPs giving them any chance of life, at all. When Karen and I disconnected our cable shortly into our marriage with the realization that the Internet was now the source of all network programming, I imagined that there would be even more white noise. The decision was primarily a financial one, though, and one with which we continue to be happy. We find all of our programming through either the network websites (which stream a great deal of their programs for free), Hulu, Netflix, or simply by purchasing season passes on iTunes. Gone were Tuesday night Cops marathons. Gone was having the television on in the background, forgetting what was even airing, as we went about this or that. Gone were the TV Guides. Unfortunately, gone were tennis matches and basketball games, as well, which is the one thing that I miss. Now, we’re more intentional about watching specifically what we want to see. There’s more music playing in the background, and rarely looping television programs.

When we visit family that still uses cable, I find myself noticing just how nearly omnipresent the television remains. I’m glad that’s not the case for us.

Moving to the Internet for all of our television viewing has reduced the amount of television that we watch. I know that’s not the case for everyone. I know people who can waste hours in front of YouTube, or stream endless programming on Hulu. I know that its all in how you use the technology, and perhaps that fact hasn’t changed from one medium to the next. I just think its kind of interesting that the same technology and media trends that brought us the frightening landscape of Max Headroom actually moved us beyond that landscape into something with much more flexibility.

Here’s to the Internet.