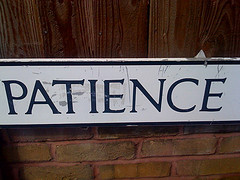 Karen and I have some disagreement on when goals should be achieved.

That is, once I get something in my head, I’m of the opinion that it needs to happen now. In fact, yesterday would be a good time. Its not that I make decisions rashly or impulsively, at least not most of the time. That’s actually part of the issue. I feel that I’ve reasoned through the decision, reached a goal after careful consideration and introspection, and all of that has taken time. So, there isn’t any point in wasting any more time. Its time to make things happen.

Karen, conversely, plans the execution of the details. She’s very wise about it, as well. There are no assumptions, no approximations with her. She plans every detail to the minutiae. Which is a great compliment to me, because I tend to gloss over certain aspects of life, to see the big picture instead of the smaller details. Of course, the big picture is composed of the smaller details, and I need someone to fill in the holes in my plan as they materialize.

And they inevitably materialize.

A serious life change is coming up for us (like we didn’t just experience that with the birth of our daughter), and I think that its been too long in the making. We had made a decision over a year ago, but hadn’t formulated an exact plan. Over the course of the year, Karen planned and led in the execution of a strategy that took care of almost all of the details, at least all of the ones that we could control. Now, we’re about to move forward in a much more secure manner, because of her planning. Had I been leading the charge, I never would have had the patience to wait this long. Once we had made the decision, it was time to go. Details, I tend to think, can be improvised.

It isn’t, though, that simple. Almost never.

I think that my problem is that I’m afflicted with more than my share of our instant gratification culture. The ability of the consumer in the digital age to immediately acquire so much of what we want leaves us of the perspective that this generalizes to the rest of our lives. Once we decide what we want to do with our lives, we think the education should happen immediately, that we should rise through the ranks of our new field immediately. We leave out the work and planning and intentionality that it involves.

I had a conversation at the beginning of the weekend about the difficulties that occur in a marriage when a couple has children. Many couples divorce during this time frame, often not for lack of wanting their problems to be solved. Yet, it seems (and I have no statistics to support this) that couples who struggle through the garbage of jobs and raising children and time restrictions and so on, and make it to the so-called “empty nest” period, make it. They’re closer, now, because they’ve learned as they’ve worked through it all. That experience can’t be rushed. We have to live through things to acquire it.

I’m not good at patience, even though I’d like to be. I really need people to tell me that my self-imposed deadlines aren’t always realistic, that there are things that I need to experience before I make it to the goals I’ve set for myself. Those experiences are what make achieving the goals worthwhile.

We always appreciate more the things for which we’ve waited.