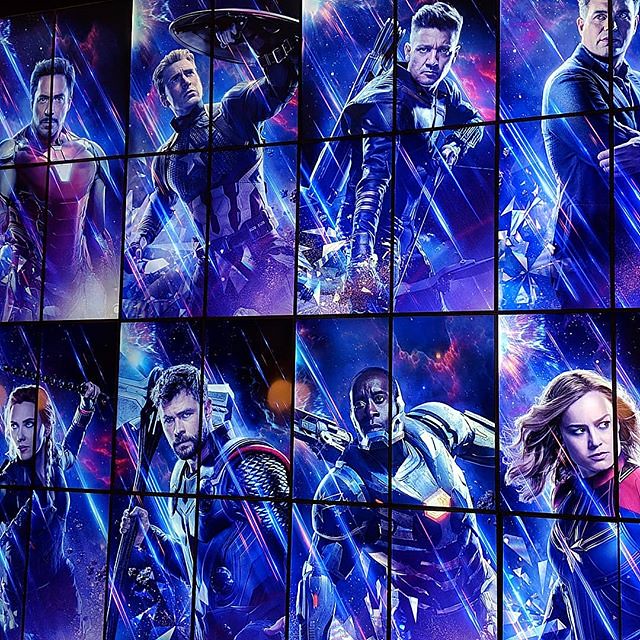 I’ve waited a week since Karen and I went to the opening night show of Avengers: Endgame to write this. I don’t want to call it a review, as I normally do, I think because of the finality of this film, of the experience of seeing the film. Because I’ve known these characters for so much of my life….ten years on the screen, and many, many years more than that in print…I experienced a period of mourning after Endgame. The heroes won…we knew that they would. I don’t think we knew how costly that victory would be, or at least hadn’t let the suspicion take root.

The fact that I’m walking away with this level of emotional response is, of course, indicative of the quality of story-telling. This is an epic that concludes an epic, and it pays so much respect to the films that have come before. The heroes reconcile old schisms, make sacrifices, and recall what it is to be heroes, all while dealing with an apocalypse.

I suppose I am doing some reviewing here, because I need to mention that the storytelling is even broader in its expanse than Infinity War, diving into time travel and alternate outcomes in true comic book form. This is predictably necessary for a film of this scope, to do justice to what we’re seeing, larger than our minds can even take in at first. That said, I felt like it became beholden to a sort of genre convention of a “final episode” at times, which led to some contrived moments.

My biggest issue with Endgame is that the inexcusable destruction of Thor’s character that began in Ragnarok continues, which is unfortunate. Thor would have been a fantastic addition to Endgame, but instead there is another character here masquerading as Thor. I think that, in order to preserve the continuity of the universe, the directors had limited options other than to perpetuate the disservice that Ragnarok’s director did to the through-line, but still…it detracts enormously from the movie.

The heroic sacrifices of our heroes at times leave me understanding…this truly was the only way that it could end…and at times left me angry, entering a first stage of grief. I’m also left with hope, ordering events from the time travel exploits in such a way in my mind that I can conclude that maybe, just maybe, someone that we’ve lost might return (rarely does any character stay dead in comics, anyway).

Of course, I’d be remiss to not tell just how much I love the final battle between good and evil, which in so many ways is what a super-hero story is about. The audience in our theatre cheered, applauded, and when we finally heard “Avengers, Assemble!” nearly responded with a standing ovation. This is the bigger universe that Tony Stark had found himself a part of all those years ago, and now, rising above all mistakes and personal failings, the one several of our heroes give everything to protect.

To be honest, my mind has been spinning as I unpacked this three-hour adventure so much that I almost didn’t write this. Because I reviewed the first Avengers film though, I wanted to review the final one. This was the ending, a true ending. Notably absent from the end credits is any mention of “The Avengers will return.” This was their final battle. Steve has received his much deserved leave and passed his mantle, and Tony can rest…the world is safe. I can recall seeing each movie leading to this, though…recall every theatre that I sat in, devouring analysis after and looking for hidden gems that hinted as to what was coming. This has been years of masterful storytelling, and I think we’re all grateful. Everything, though, must come to an end. We’ll always remember this ten-year adventure with excitement, knowing that it ended the best…the only…way that it could. For one final time, the Avengers fought the battle we never could. As Fury predicted at the close of the first movie, they were there because we needed them to be.