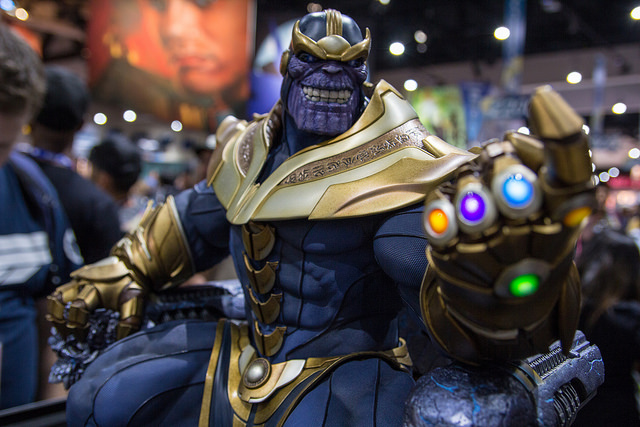 A few days ago, I went to see Avengers: Infinity War for the second time. As usual, you see a lot that you missed in the second viewing. I still hold to my original critique that the movie is too big for it’s own good. However, there was another layer that I had missed the first time due to the sheer epic scale, and I think that it ties into the concept of the nature of a hero.

I’ve heard interviews with the writers of Infinity War in which they say that this movie was about Thanos. I found this to be very true, to the point that the heroes are almost all incidental characters. I applaud this, also, because, in order to tell the story of a hero well, one must have a compelling story behind the villain. Cheap and one-dimensional villains cause movies to fall (we all try to forget the altogether unfortunate treatment of the Mandarin in Iron Man 3). Thanos is anything but cheap or one-dimensional. He’s just as heart-breaking, in fact, as he is terrifying. He is terrifying because he acts with a decisive conviction. He will do anything, up to and including murdering the one person whom he (claims to) love, to achieve his goal. This is bad enough, and evil enough, in it’s own right.

On the second viewing of the film, I realize that Thanos is driven by such conviction because he earnestly believes himself to be the hero.

In any genre of literature, the most dangerous of villains live here. They are dangerous because they fight with the same conviction as the heroes. They believe that their cause is just. The motivation that comes with the belief that one is doing the right thing is not easily defeated.

The postmodern tendency here would be to lean on relativism. That is, if the villain can so easily be convinced that he is right, and fight with such a firmly held belief, and that fight can be the cause of so much evil, then let us stop defining “right” as an absolute. “What’s right for me is right for me, but maybe not for you,” and all that. That’s a slippery slope, and it’s a logical fallacy here, because there is an absolute point in which Thanos specifically proves himself to not be the hero.

Thano’s flaw is that he fails to respect all life as sacred. In the self-perceived nobility of his cause to save life, he is reduced to only logic. He sees the world, the universe, as only a mathematical equation, a “simple calculus.” In this reductionist worldview, killing some at random to save others is completely acceptable, because it is an action borne only of logic, while being devoid of any ethic.

The most powerful moment of this film is when Captain America refutes this type of logic with ethics. When confronted with the Vision’s sacrificial impulse to give up his own life to save many others, Steve Rogers replies firmly, “We don’t trade lives.”