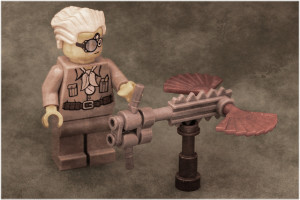 In Brian Michael Bendis‘ story arc for Marvel’s 2013 graphic novel Age of Ultron, we are presented with an unexpected present that one would initially guess to be an alternate future. The artificial intelligence run amok known as Ultron has succeeded in destroying most of humanity. The handful of people who have survived in the world’s major cities have an even smaller handful of heroes among them, hiding underground and attempting to form a strategy to overcome Ultron. While Bendis deals with many themes in these pages, one of the most prominent is the need for what we view as progress. Bendis makes us privy to the internal dialogue of Hank Pym, the Avenger known as Ant-Man and the creator of Ultron, as he wrestles with the potential to benefit humanity that he sees in the concept of the Ultron artificial intelligence. The reader is left feeling…skeptical…of what Pym wants to achieve, understanding that his hopes are mis-placed. However, his motivations are clearly pure. He wants to help.

When faced with this extinction of humanity, Wolverine makes a more difficult choice. He wrestles with the decision of whether or not to travel back in time and end Pym’s life before he can create Ultron. The reader is even more dubious of these intentions, but Wolverine sees no other real alternative. The choice between one life or millions of lives is clear to him in that moment.

In the 2015 cinematic version of Age of Ultron, Tony Stark encourages Bruce Banner to assist in exploring the artificial intelligence that will become Ultron. He presses Banner to accept that this is who they are, the “mad scientists,” and must do what they do.

That is the intelligence that I would find artificial.

C.S. Lewis points out a sound philosophical truth: just because we can do something, doesn’t necessarily mean that we should. Yet, the logical fallacy that “can” must necessarily lead to “do” drives much of what we view today as progress. Humans as a race are always pressing forward, always confronted with our own mortality, seeking to make life more palatable not only for ourselves, but for our successors, our children. Once we discover that we are capable of something that we perceive as good, we feel an overwhelming drive to do that thing, hang the consequences.

Part of the tragedy of the character of the mad genius is that s/he works in isolation much of the time, experiencing an absence of feedback from other people about their plans. No one can see all of the failings of their own plans…everyone needs another party to hear their ideas, to proofread their work, as it were.

I think that our decisions, sometimes very important decisions, are becoming rushed. A desire to help others is a noble thing, but not every wonderful idea to better mankind turns out to be such a wonderful idea. In short, innovation must be checked by wisdom, and that wisdom is in short supply when crowd mentalities rush to gather around what is popular, without giving careful thought to what it is that they might be supporting.

I’ve been accused of being a futurist, because I become excited about the potential of what new discoveries and technologies can offer us. I see the problems that they solve, and dream of how much simpler life might be with that problem solved. Then I have to pause, I have to step back and examine whether or not my excitement is equivalent to Pym’s excitement as he dreams of Ultron. Sometimes I continue to see minimal negatives, and sometimes I feel uneasy, a misgiving that gives pause, and is usually justified when I think the issue through carefully. I’m no inventor…I don’t build exciting new things. I’m certainly no entrepreneur…while I dream of new stories and worlds, I don’t formulate new strategies to change the world as we know it. So, granted, I’m not in a position to truly understand many of these things. I am, however, a critical thinker. I believe in examining things through a lens of close observation. I think of what great science fiction writers have written, warning us of the potential outcomes of some of our innovations, and I recall Tillich’s observation that artists are the prophets of our time, warning of dangers before the rest of us can see them.

And I wonder about the dangers, unseen in the excitement over the good.

Photo, by Pascal, is public domain. 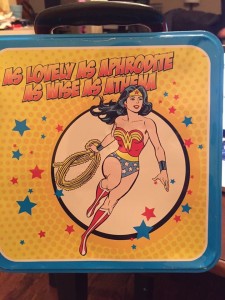 When I was in elementary school, society was in the era of “don’t do drugs.” Each generation seems to have its own popular message that all school children must hear, and this was ours. Drugs symbolized all that were evil, and, like all important cultural messages, we entrusted this to our fictional role models to reinforce. I remember the day well. We were in my 5th grade classroom, and the teacher passed out the anti-drug-use comic books. They featured the New Teen Titans. Many of the kids in this classroom hadn’t heard of these characters, as they weren’t what one would really consider mainstream superheroes at the time. Having already developed my passion for the mythology, though, I thought that this was the perfect group to tell us the story that we needed to hear. I wasn’t in any sort of risk group to abuse substances, but eagerly dug into the pages to see how these heroes dealt with the problem.

Comic books provide us with a snapshot of where we are as a culture at any given point. They give us insight into ourselves, both our self-perception as well as our perception of others. They show us that to which we can aspire, an image of a larger truth, something outside of ourselves that is good, something in which we can believe. This is why superhero mythology is so powerful, why it has been so powerful long before the current trend in popular films, and will remain so when this trend has passed.

We need to believe in good. We want to believe in someone good who will defend us from the evil that we cannot overcome ourselves. We need a symbol of a light in our darkness. This is especially true of certain groups and populations that are a bit more deprived of strong, hopeful role models than others.

Because I believe that this is bigger than just pop culture, and gives us a window into that hope…that it contains a theological insight that will only serve to spark positive discussions lasting far beyond mere entertainment value if it is truly engaged…that I become so frustrated when some treat this as a trivial thing, as a problem, as something subject to censorship.

Because I believe this, my shock and frustration are beyond words at the ignorant and narrow-minded reaction of an elementary school who considered a girl’s Wonder Woman lunchbox a dress code violation. I would think that the public education institution…an institution in which I increasingly lose faith (a reaction only strengthened by news such as this)…would choose to engage this, to discuss it, to help students begin to formulate their own reactions and thoughts to the mythology at whatever level they are capable. Obviously, if a student is recognizing Wonder Woman as a strong female role model, which is an excellent choice, then she is already engaging the subject and identifying with positive aspects of the character. I would think that this sort of critical thinking would be encouraged early in education. Obviously I’m mistaken.

And, while I’m particularly frustrated with this situation because I hold superhero mythology so closely, I would have this reaction to the censorship of any fictional character.

Wonder Woman is known historically for her bracelets which defend from attack, and her Lasso of Truth…neither of which are offensive weapons. Captain America’s symbol is a shield, something that stands between evil and it’s victims. Superman, arguably the most well-recognized superhero, is an upright symbol of strength, having no aggressive imagery about him. Batman abhors firearms and refuses to use them. Blanket policies and so-called “zero-tolerance” mentalities, being void of critical thinking themselves, only serve as a barrier to developing critical thinking in an educational setting. In this case, defining (arbitrarily, it seems) all superheroes as violent characters simply ignores too much evidence to the contrary in the literature, to say nothing of examples specific to educational settings.

Certainly, superheroes engage in violent actions. They take extreme actions to handle situations that cannot be handled otherwise. The actions of superheroes would place them on the wrong side of many viewpoints in our modern culture, as a well-respected comics author points out.

Would the gun advocates mock Batman's position? Would liberals decry the existence of the JLA or Avengers? I think they would.

The value in this is the healthy ideas and discussions that come from engaging in the material, from thinking it through. None of this can occur when we prohibit our children from engaging their role models.

It seems that the public education system would have larger priorities.

Image of the actual lunchbox, from Imgur.