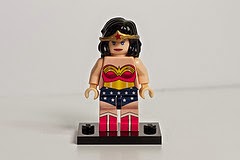 While I grew up profoundly geeky, immersed in Dr. Who, Star Trek, and Star Wars and the like, with my mother, my father was a technician and a builder. He skillfully brought shapes to life from wood in his small, self-built shop behind our home. When I was young, my parents bought me a small play toolkit with a rubber hammer, saws, and screwdrivers. I followed Dad around the place fixing things. It’s really cool, because those have been passed down to our daughter now, and she loves them as much as I did.

All that play at building and fixing things notwithstanding though, I never played with Legos…at least, not that I recall. I certainly don’t have any floating around in my old childhood toy collections. I’m not sure why…most of my geek friends adore their Lego memories and love the Lego movies (none of which I’ve ever bothered to see), but it just wasn’t an element of my childhood.

Several years ago now, I married a lovely woman who is a geek, as well as a feminist. She has Lego memories. During a slow weekend morning a couple of days ago, she was talking with me about Lego’s new Research Institute set of female characters. The set is a response, depending upon how literally you read Lego’s official statement, to either what their fans wanted or to critiques that they were painting female characters in stereotypically weak roles. In any case, this set (which has apparently sold out, and was unfortunately, as I understand it, a limited edition) seemed to be a step in the right direction, portraying female figures as scientists, astronomers, geologists, and the like, giving young girls aspirations of respected professions in which one uses one’s mind, rather than previous incarnations which went shopping and sat in hair salons.

There has been criticism, as Karen and I discussed, from some circles that, even in the Research Institute, there are inconsistencies with the real world (a chemist would never wear makeup to work), and she found that troubling, because the gender stereotypes persist, even if in a small way.

Having a daughter (who, at the risk of bragging, is particularly intelligent), and wanting our daughter to have strong female characters to view as role models, I’ve become more sensitive about these sorts of things myself lately (by strict definition, Karen argues that I, too, am a feminist). Our daughter has picked up our love of books, and I think any of us can attest to the fact that fictional characters carry just as much impact as role models as do historical and contemporary people in our lives and cultures. A great deal of who I wanted to be as a man came from fictional characters as I grew up reading, many of them super heroes.

Of course, I took this moment to insert into mine and Karen’s discussion that this is why women and girls who love comics need to see strong portrayals of strong heroes such as Wonder Woman, or the Black Widow. DC Comics has in their universe the strongest female super hero in comics literature. Wonder Woman, especially with the masterful way in which she’s painted in the New 52, is a hero to whom girls can look to and aspire to be like, which is one of the primary functions that super hero characters fill in our literature. She’s not (when written well) over-sexualized. She’s a warrior who places her own well-being second in order fight for good and defend the weak.

Have I mentioned that it’s absolutely a crime that she hasn’t had her own film, and that she’s being introduced as a secondary character in an upcoming film? So wrong…

I see common ground between the two worlds. Apparently, there’s some suspicion floating around that Lego felt that a lot of strong female role models like the Research Institute wouldn’t be received well as ongoing items, which is why it was a limited edition. Certainly, I’ve read of comments by film-makers that a Wonder Woman film wouldn’t be received well by a wide-spread audience, and thus it hasn’t been made. I can’t speak for Lego fans, but as a comic fan, I can respond to the latter with a resounding, “huh???” Does DC Entertainment have any idea how many new readers Wonder Woman gained with the launch of the New 52? Certainly, there’s a great deal of the parenting public out there that want cool scientist toys for their daughters.

Our daughter shows inclinations toward many things: reading, athletics and kinesthetic learning, storytelling and imaginative play. As she reads and watches more, and she will eventually reach an age at which Karen and I curate what she reads and watches less and less, I want to know that there are strong female role models in the fictional characters that she experiences, because she will look up to them and they will impact what she feels that she is capable of doing (have I mentioned that she’s already liking superheroes?). The idea that a marketing department might use some statistic acquired after conducting some focus group to determine that there would be a poor return on investment (I hate that term) if they provided us with more exposure to such characters is not only obviously in error, but openly reprehensible enough that I have even less cause to think that marketing is necessary as a discipline.

These sorts of characters, whether in literature or in toys, are necessary, and they do good, and there should be as many of them as we can get. History, if it proves anything, proves that they will be well-received.