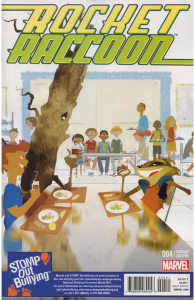 I’ve been intending to write about this for over a week now (he says as he blows the dust off of his neglected blog), but have you seen these variant covers that Marvel comics did for STOMP Out Bullying? If you haven’t, take a moment to look.

Marvel Entertainment was approached by the national anti-bullying organization to assist in promoting National Bullying Awareness Month, and these variant covers were the result. Particularly a nice approach by Marvel, as variant covers tend to be the sorts of things that collectors pounce on, and thus I imagine these were received well.

As you see, the covers feature prominent super heroes from the Marvel universe intervening in the sorts of situations that children face in our school systems every day, as well as situations that follow them outside of the school system (such as cyberbullying). Having spent a great deal of time working with kids who didn’t fit in with the mainstream, I’ve seen how cruel children can be to each other. It only takes one to create a herd mentality that follows the leader in targeting the one without support. More than what I’ve seen in professional pursuits, however, I know what I experienced in school. I was a geek, a misfit, the one who tried to do well in his classes. I didn’t hang out with the popular crowd, because I wasn’t accepted by them. I know the terror that comes with being isolated in a stairwell between classes by someone intent on doing me harm based simply on the fact that I was different. I know the nightmares that follow, the intentional alteration of the routes that you take through the school building. I remember that all too well. There’s been much research into what causes this phenomenon, all of which is valuable, but I will tell you this…what the child being bullied needs is to feel empowered, to know they are not alone.

The nature of a hero is that he or she with more power fights the battle that we cannot. They defend us from the evil to which we would inevitably succumb were we to not find help. Look at the covers from Marvel carefully. The heroes aren’t reacting with force against the bullies. I particularly find this striking in the cover featuring the Hulk, one of the characters that we would immediately expect to retaliate against an act of aggression. Instead, they offering compassion to the child being bullied, offering companionship. In doing so, they are empowering that child, showing the child that they are not alone, and are, in fact, very much like very good people.

The child who is bullied needs that heroism, that support. And we, each of us, can be the hero who helps them in some capacity. We can reach out to offer them that companionship, to let them know that they are not alone and that they are in good company. This is not an activity isolated to professionals…in fact, what has consistently been proven is that family and family friends have more of a positive impact on children than professionals who may be involved in the child’s life. Part of the nature of a hero is that the desire to be a hero, to help the helpless, is wrapped up so deeply in the human experience. Initiatives like this help us to see the small ways in which each of us can act on the desire to be a hero to those in our lives less powerful than ourselves.