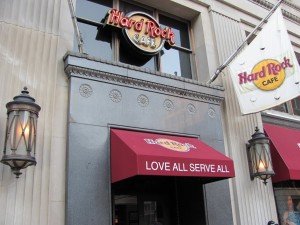 One Friday night a couple of years ago, Karen and I were sitting in a restaurant, and there was a family behind us. They had a daughter…I’m not sure how old she was, but I’d guess around 15. The daughter was talking about music, and she specifically mentioned the band Skid Row.

Have you ever had one phrase stop all the other sounds around you, so that you could only hear the person who said it? That’s how oddly impactful that name was to me.

You see, I went through my metal phase in high school, and Skid Row was one of my favorites during that rebellious period. I can still scream out the chorus to “Youth Gone Wild” with little thought involved. It was just funny to me that someone of that age would be conversant with 80’s metal (although I think Skid Row released a new album within the last couple of years).

A few days later, I saw a boy, younger than 15 by my best guess, wearing a Guns N’ Roses t-shirt, the one that corresponded to their Appetite For Destruction album. I’m so clearly able to recall the edgy intro to “Welcome To The Jungle,” or the seducing guitar line to “Sweet Child Of Mine.” Again, I was struck by how…out of place…this seemed.

Also, I’m a little disturbed that oldies music for them is what I grew up on. Geez, this smells like a mid-life crisis.

I’ve seen music from that era used with some frequency in video games (relatively) recently, but some of this is a bit of niche in which to be interested in these days, confined, perhaps, to a random Pandora station listened to during commutes by…well, by someone like myself, I suppose. I’ll confess that I’m a bit of a snob in my assumptions that today’s pop music will never manage a resurrection like that, but will only fade into obscurity as music with poetry and emotion continues to take its place in…video games…

Please don’t disabuse me of that notion.

Seriously, though. Isn’t that funny?