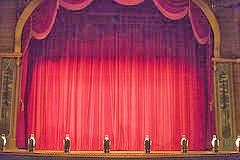 I walked outside this morning on my way to the office and nearly swooned in the warmth. I actually rolled down my window at one point. It was almost…fifty degrees! I remember well the first week that I lived in Virginia. I moved there in January, being used to heavy sweaters and winter gear for at least two more months. That week I remember driving to class with no jacket on and my sunroof open. I thought I had reached Heaven. I’ve always hated the cold and hated winter, and here I was, perhaps finally free of it.

Now, ten years later and after two years in New England, I have perhaps finally acclimated in a sense, if my comfort with my window down this morning is any indication. It’s been a long time coming. I expected to be rudely re-acquainted with what a real winter was after so many years in the southeast, but I hadn’t expected it to be as severe as the two winters I’ve been through in New England. Harsh would be an inadequate descriptor. I’ve wrestled with a depression for a good portion of the last two years that I thought was a thing of the past.

That hasn’t been entirely seasonal in nature, though. Changing careers at this point in life is exciting, yes, but fraught with more stress than I had anticipated. I thought it would be rough, but I didn’t know it would be rough. I didn’t anticipate the long acclimation period to that, as well…to being in a position in which I knew information, but lacked experience. That’s not a situation in which I’ve often found myself for the last twelve years.

I suppose that, if I were to identify anything that I’ve taken away from this experience (other than I should listen to my instincts, because there are many ways in which this might have gone much more smoothly if I had…but that’s another post) it’s that I should avoid expectations. Difficult, because we enter every experience with expectations. That’s simply part of the human condition. The last two years of my life, though, are prime examples of how the act of entering into new experiences with a high expectation has resulted in an enormous amount of frustration and disappointment. I thought that life would be easier after this career change, that it would quickly reward my efforts, that our family would be in a better position both emotionally and financially. Life, unfortunately, and especially in our political and economic climate, is nowhere near that predictable or sunny.

In short, I don’t find us riding waves of familial success as I thought we would at this point. Rather, we are treading water in many ways.

Could this have been predicted? Perhaps some of it could have. This radical life change was entered into thoughtfully and prayerfully, though, and it was not impulsive. It’s just impossible to predict everything, or even most things. And, overall, it’s been worth the experience and has placed us in a better position in many ways. I wish, though, that my expectations hadn’t been as high, that I hadn’t permitted myself to build up this elusive ideal of what life would look like before reaching this point. Because, if I hadn’t done that, I wouldn’t have hit quite as hard, perhaps, when the rough spots occurred.

Weather is unpredictable, both literally and metaphorically. Perhaps it’s better to accept that as the primary constant in our experiences.