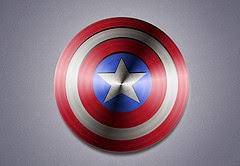 When the Captain America: The First Avenger was nearing it’s release, I remember having a conversation with an old friend over coffee. He wondered what would be done with the character on film, the undertone being that he was concerned that Cap would be reduced to the hard-fighting, propagandized embodiment of the “American dream.” I refuted that the character has a long history of being much more than that, and the capacity was certainly there if the writers chose to realize it. Certainly they did in the first film, and I had high hopes…and high standards… for this week’s debut of Captain America: The Winter Soldier.

I also find myself recalling another conversation with another friend who collected comics as I do. He operated a comic book interest group in the city where we lived, and said in one of our conversations that comic books provide a snapshot of where our culture is or has been at any given moment in history. I think that’s true. I also think that the potential for this is even greater as our heroes leap from the page (some beautifully, some less than spectacularly) onto the screen. If ever there was a super hero story to date that wrestled with the changing times in which we find ourselves, it is this film. If ever there were a character to wrestle with these massive issues and give hope in our fight to defend…or even to understand…our identity, it is Captain America. If ever there was a time to put these questions onto the screen, it’s now.

Oh, and those high standards? They were exceeded in nearly every way.

Steve Rogers, remember, is a man out of time, a member of the “greatest generation,” the product of an era when true freedom was felt to be threatened and a nation of people were willing to do whatever it took to defend that freedom. He is displaced to our current time, and left to sort out a country extremely different than the one for which he fought. Captain America symbolizes everything that we would want in a hero…good for the sake of good, annoyingly good, an ideal that is more powerful in spirit than in any physical capacity. You likely recall his line from the Avengers, when, saying that he had been told that America won the war when he emerged from his icy hibernation, he added, “They didn’t say what we had lost.” It’s hard to look at where we are and wonder if we haven’t lost a great deal. The ideal of sacrificing for what we believe isn’t in question. The question of our age is rather, what is it that we’re sacrificing? How far is too far, and what is it, exactly, that we believe?

This film does what the super hero genre is most uniquely qualified to do, and pulls that lingering question under a spotlight to be examined. Were I to isolate a single theme for The Winter Solider, it would be this: What is freedom? Nick Fury holds one ideal, and guides SHIELD in that path. “We take the world as it is, not as we’d like it to be.” He’s angry that Captain America won’t accept that ideal. After all, he reasons in early and very meaningful dialogue, Captain America’s generation got their hands dirty protecting freedom, and did things that they weren’t proud of. The Captain’s response is that they did indeed, but that they did so for freedom, not fear.

In a post-terror-attack world, has our definition of defending freedom become a reactionary one driven by fear? Conspiracy theorists would tell you that this has given rise to those who say that there is such a thing as too much freedom, those who would act for what they see is the greater good of the entire country without that country’s consent or permission. Our surveillance society concerns of today is the example that most likely leaps to mind, and the movie captures this fear, wrestles with it, forces the audience deeply into both sides and the answers at which they arrive to the questions, the questions that have to be asked. The movie asks them, in a way that I can’t recall a super hero story doing since the Watchmen came into print. And, while that might be shockingly high praise that will be off-putting to some, I’ll say in my defense that, in order to explore the character of Captain America as a sequel deserves, the writers had to delve deeply into the anxieties of the times, into the questions that we all have on our lips, just as Moore did with his anti-heroes. The difference here…the thing that Captain America symbolizes above all else…is that there is hope.

Captain America, after all, may be the first super hero, but he is also much more than a super hero. He is a symbol of the everyman, and someone who must probe the questions that we are frightened to probe. This film is simply just deeper than the rest of the Avengers canon, and, while the films preceding it have certainly laid the foundation for this, there just hasn’t been a film to date that was more capable than this one of exploring the issues at hand, and I am so glad that Brubaker, Markus and McFeely did not shy away from doing so, because this screenplay is simply, unquestioningly superb.

Fitting Marvel’s history of placing all-star casts in the Avengers films, this certainly is no exception. Chris Evans, Scarlett Johansson, and Samuel L. Jackson all bring outstanding performances to the screen, as do Cobie Smulders (who we discover may play a very important role in upcoming films?) and Anthony Mackie as he debuts the Falcon to our lineup of heroes. Evans allows Steve Rogers to develop as a character is huge ways here (his scene opposite Hayley Atwell is…wow…). Also, for long-time comic book fans, Agent 13 makes an appearance, hopefully the first of many, and I’m happy to see the thorough evolution of the Black Widow (and, if I may interject and channel the voices of long-time fans everywhere…please, Marvel…she needs her own film!).

My only complaint with the film, if this is a complaint at all, is that the themes which it explores are so huge, and it’s treatment of them so thorough, that the Winter Solider story arc (which I won’t spoil if you’re unaware of who he is) lacks a bit in where it could be taken. That is, by the end of almost two-and-a-half hours in the theatre, I wanted to see him developed more.

From a closer perspective, the choreography of the action sequences are generally excellent here, although the final and climactic face-off between Captain America and the Winter Solider became a bit too predictable. The pacing is ideal, giving the audience just enough time to relax before returning to the edges of their seats, and the plot twists…well, let’s just say I didn’t see this one coming.

Captain America is an iconic character for reasons that many don’t realize. He simultaneously symbolizes and calls into question our nation’s identity. This film realizes that potential, and I can’t imagine anyone not taking something huge away from the movie. Super hero fan or not, Avengers fan or not, you will not be disappointed here, you will be enriched.

And, just in case you’re not conditioned for it yet, don’t leave when the credits roll. There are not one, but two hidden endings, one of which introduces three important new characters to the Marvel universe.

I give Captain America: The Winter Soldier a solid ten out of five stars.