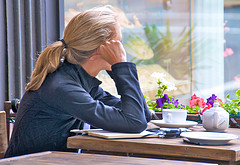 I hope this revelation speaks more to the amount of technological progress that my generation has witnessed than to my age, but I’m going to throw it out there anyway. I completed my undergrad in the days when email was in its infancy. Students did not have email addresses issued to us from our schools. I’m not sure professors all had email addresses. In fact, I was a senior in college before I had my first personal email address. Did I mention that I was a communication major?

In that age of yesteryear, I remember one of my professors having a humorous cartoon on his office door. The cartoon detailed the rise of communication from Neanderthal man to the present, and suddenly took an enormous plunge back to where it began when voicemail entered the picture. I didn’t truly understand the humor then…

I had a conversation with someone on Twitter a few days ago after mentioning (during one of those days) that I really shouldn’t have been answering my phone at that point (the end result was that both myself and the person calling were both hopelessly confused by the time we hung up…like I said, one of those days). He commented that he far prefers email over voicemail, and I agreed. My reasoning is that I can take the time to say exactly what I want to say in an email…the variables are removed, and I have time to edit. To a large degree, that reasoning can be applied to social networking platforms, as well. For one thing, I don’t type messages while in a moving vehicle, whereas I easily leave a voicemail while driving. Thus, I’m more likely to ramble or mis-speak something. When I’m writing that message, even in SMS, I glance back over it before sending. The odds of miscommunication and subsequent embarrassment (or flat out unprofessionalism) is significantly reduced.

I think its important to say, though, that all of these forms of communication are secondary to face-to-face communication. Hierarchically, I always place speaking with someone in person above all of the previously mentioned modalities of communication. For that matter, I would even prefer video-calling in an important situation (I’m defining important as moments of human interaction that affect who we are as people…not business transactions). The reason is that human interaction has nuances of non-verbal and paralinguistic elements that can completely alter how a message is transmitted from the sender to the receiver. Someone’s tone of voice or facial expressions make a message a thousand times more expressive than the same message in written format. In person, we instinctively interpret body posture and other clues that complete the message. Written communication does not replace this, because it can’t communicate the full message.

I think that is why live performances in theatre are more powerful than film or television. Partially because the entire person (in character, of course) is present to communicate his or her message to the audience, and, equally as important, the audience is there to respond. A play isn’t complete without an audience, because there’s a feedback loop created in which the actors feed off of the audience’s reactions. That’s why no two performances are ever exactly the same. Similarly, the same conversation will never be duplicated between two people, because those people react to each other in a unique way at that moment in time.

If I’m communicating an extremely simple personal message (like “Happy Birthday”), or a list of information or business detail, then written communication is certainly my preferred mode. Whenever possible, though, seeing and being physically present with the person to whom you are speaking is the only communication that is truly whole, that truly permits human beings to completely interact with each other at the deepest level.

Do you think we’re losing that whole communication? Replacing it with something inferior, something that was only intended to augment, and not substitute for, the real thing? Sometimes, I’m concerned that we’re doing just that.