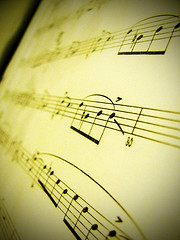 I listened to a fantastic conversation with Bobby McFerrin over the weekend, in which he discussed how music has the ability to take us to these amazing places. As is typical when Krista Tippett  interviews a musician, there were numerous tracks of McFerrin’s music interspersed with the interview. Interestingly, McFerrin has a background in Episcopal choral music. One of the tracks that played during the interview was of a piece that McFerrin wrote adapting Psalm 19 to music. The harmonies were very choral, lending to a liturgical atmosphere. What also struck me in listening to the harmonies, which were extremely close together, was that they were not dissimilar to barbershop.

Far back in the mists of time, I sang in a barbershop quartet. I was a bass. The harmonies are extremely difficult, because they are so close and so complex. I remember that year…it was great fun, one of the highlights of an otherwise dim career as a music major. I’ve performed with various choirs in my life, as well, but I’ve never connected how closely related the compositions between the two genres can be.

, or when an Eastern jazz riff is interrupted by a distorted guitar solo

. Or, when a liturgical, choral piece is complimented by barbershop harmonies. One could argue that this is a very post-modern preference, which is interesting, because I’m not an overly post-modern person. I think, though, that these fusions bridge gaps in generational preferences, in perspectives, in thinking. McFerrin, in the interview, said that music can open us up to grace. If this is true, and I think that it is, then part of the beauty of a fusion of musical styles is that it, at least, helps us see that we have more in common than we have differences…and that we’re not as far removed from each other as we might otherwise think. Despite the fact that our harmonies are complex, they can work when they’re woven closely together. They sound better that way, as well.