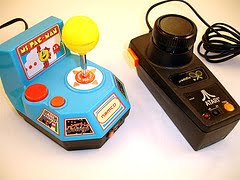 Hold on, because I’m about to date myself.

When I was young…very young…my parents bought the first video game system that I’m aware of ever existing: Atari’s Pong. I remember their being rather exasperated at me when I curiously reached out in the middle of one of their matches to press the “reset” switch. Oops. Video games have come a long way since that bouncing virtual tennis ball: I remember pumping quarters into Frogger, Pac Man, and Star Wars games while my mother was grocery shopping. I phased out of that interest, and have never been a gamer in my adult life. In fact, they usually lead me to frustration (I got into a bit of trouble with a friend for throwing his X-Box controller in anger when I attempted HALO). So, my video game experiences today are limited to electronic chess (which I insist doesn’t really count, because it’s too intellectual), and a Pac Man game I added to my iPod more for the sake of nostalgia than anything else. I’ve even avoided Facebook games until recently, when I confess I have become slightly caught up in the Mafia Wars phenomenon, though this hearkens back more to role playing games such as Dungeons and Dragons, which was a longer standing addiction of my youth…but that’s a footnote, I think.

I make no secret of the fact that I openly dislike video games at large. I’m convinced that the trendy diagnosis of ADHD is a condition we’ve created, and electronic gaming is at least partly responsible. While I decry the claims that youth are more violent because of video games and scoff at the “life imitates art” debate, I just think that video games are, largely, a waste of time and damaging to one’s psyche with anything more than small amounts of exposure.

With the commonplace existence of online identities and social networking, however, I’ve began to see a bit of detachment in our real-life existences that should be augmented by electronic means…a sort of game-play mentality that gives me pause. I’m a huge fan of social networking, and I am a firm believer of the positive implications of this technology, mostly because I have experienced these positive implications, while, with some small effort, managing to avoid most of the negative implications (which I recently wrote about for Catapult Magazine here). I experienced the detachment of electronic media for the first time, however, about two days ago. I had re-connected with a former co-worker through LinkedIn, and asked this co-worker to generate a recommendation for me. While doing so, I suddenly felt as if I wasn’t in the real world, that I was making a move in an online game to earn more points or reach another level. This is partly the fault of how LinkedIn words their web copy (you profile becomes x% more “complete” with recommendations), and partly because, I think, I had just logged off of a Facebook game. It seemed distant to me until the next morning that this was a real person, a professional connection even, that I was contacting…a professional courtesy for which I was asking, not a number of points or a role of the dice in a game. The fact that this momentarily escaped my mind troubles me. Actually, it troubles me a lot.

While I suppose most things are okay in moderation, I am concerned enough to seriously consider abandoning what minimal game play I do engage in, simply because that momentary effect on real life connections carries with it huge dangers in my mind. Perhaps this is the two-edged sword of the advantage to being able to re-connect with former colleagues through social networking. If so, then the benefits outweigh the costs, at least for the moment. Game play is a basic human endeavor…one could argue that it is a human need…for distraction from the pressures of our insanely hectic lives. When the games overcome our perception of reality, however…then it becomes like those who attempt to become their characters from role-playing games and immerse themselves a fantasy at the expense of their reality. And I think that to be the key: fantasy is healthy and necessary, but it cannot occur at the expense of reality. There is too much of ourselves at risk when that occurs, too much of each other’s lives.

And life is always more important, because, just as it is not a dress rehearsal, neither is it just a game.