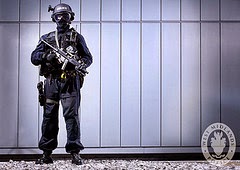 The street outside of our apartment complex entrance is a busy one, especially during a weekday morning. Two schools are on that street, among other public facilities, and the speed limit drops accordingly within a block. I learned within our first week of living here that the local police department, seemingly having nothing better to do on any given day or night, has two favorite spots into which they like to tuck their cruisers and wait for someone not paying attention to the speed limit drop to happen by. I’ve seen them in the dark standing to the side and pointing their lasers over their hoods at oncoming cars to check speeds. These guys take this stuff seriously.

This morning, two cars ahead of me, the inevitable happened: the blue lights flared to life, the cruiser emerged from hiding, and someone likely running late for work was made significantly later.
I spin the stories in my head: someone who had the battery die in their alarm clock, who is struggling to make ends meet and has a boss that refuses to understand anything but punctuality and is having a bad day himself, now 30 minutes late instead of 5, terminated on the spot and left with no income, sky-rocketing insurance and an expensive citation, all because they were in a rush to keep their responsibilities.
And, yes, I know that it is never that simple, that driving is a privilege, and that there’s public safety to be taken into account.

When I was in college, my guilty pleasure became watching Cops. My father and I used to watch it, actually, on a many a Saturday night, for years. We found the antics of the individuals being arrested and the crazy situations to be no end of amusing. Karen found my Saturday night Cops-watching habits to be…less than tasteful…when we were first married. Watching the show through her eyes is interesting, because, as the suspects (“innocent until proven guilty in a court of law,” of course) offer their excuses, she hypothesizes ways in which they could, in fact, be true. And, so, my mind wanders to all of the situations in which I’ve found myself in life, and remembered myself thinking that I would have a ridiculous time explaining the situation to someone (like a police officer) were I to have to do so. I was completely innocent, but we’ve all had those…awkward…moments.

There’s something troubling about our sweeping tendency to assume the worst, to disbelieve the awkward explanations, to make up our minds as to guilt, regardless of the legal standing. I’m the worst at not trusting people, but I know that it does harm to not do so.
I’ve had many friends who were police officers in my life, mostly because of my old career. They’ve generally all told me the same thing: It’s difficult to not become jaded because everyone lies to them. Everyone. They never hear the truth the first time. I understand how it would become so easy to distrust everyone with whom you have contact if you had that experience.
And, so, it becomes cyclical. We assume the worst.
And then I read of tragedies such as this.
Trust isn’t easy. It has to be earned, yes, but it also must be given. I don’t want others, be it my family, my friends, or the officer who just stopped me for speeding (because, let’s face it, that’s happened a few times in my life) to assume that I’m going to do something nefarious.
There’s plenty of reasons out there for us to not trust. Those reasons make trusting difficult to do. Nothing important is ever easy. At some level, we really must stop assuming that everyone standing next to us is evil.
Photo Attribution: West Midlands Police under Creative Commons 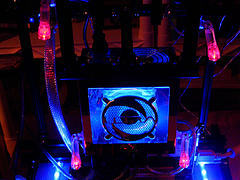 Ahh…technology. What would we do without it? And, perhaps more to the point, what are we going to do with it?

Little technological malfunctions set me on edge at times. Take last night for example. For the second time in a few months, I experienced a password glitch with my Barnes & Noble account, and I couldn’t sync a book I had just purchased with the Nook’s iPad app. Three minutes of trying later, and by the time I called customer service, I had all but announced my return to paper books out of frustration.

I’m better now, though. Thanks for wondering.

Along more academic lines, there has been a lot of interesting thought  in the past few decades about the metaphysical or theological implications of technology…what we as mankind are attempting to achieve through our progress. One doesn’t have to look far for the perpetual stream of thought-provoking insight on how our technology is changing us even as we create it. What and how we invent, and the things for which we ultimately use our inventions, say a great deal about us as a people.

I remember, for example, checking a book out of the library when I was in elementary school about the city of tomorrow. The book was large, with lots of pictures. I remember that it portrayed cars that traveled on mono-rail type circuits through a futuristic city…cars that you didn’t actually have to drive, but rather simply told an address and let them take you there. Everyone used them in this book, and I remember thinking that this would be a tremendously cool experience. Of course, the concept of intelligent cars was a natural desire to take hold of the America psyche, because we love our automobiles. I remember, when I was young, my father joking about how he wanted a Knight Rider

type of vehicle that would leave its parking place and come to the front of the grocery store to meet us. I remember that I sort of wanted that, too, because, again…how cool would that be?

Interestingly, now that the technology exists and is being actively tested, it turns out that there are some interesting legal ramifications involved, beyond the social questions of whether or not we trust our programmers to be able to prevent our cars from getting us into accidents.

Beyond the theological implications of technological development, there is a world of legal quagmire here. Our progress, in short, is decades ahead of our legal system.  Inventors, as it were, travel at warp speed, while law-makers remain in sub-space. Nowhere can this be seen more readily that in the privacy debates that dominate our headlines on a regular basis, to say nothing of how the copyright system struggles to keep up with the unprecedented availability of music, film, and literature available at a moment’s notice.

I’m fascinated at the age in which we live. The technological advances that have occurred since my grandparents’ generation is unprecedented, and now, in my generation, the legal system is scrambling to keep up, largely at the behest of those who stand to make the most money in the new age (as usual). The number of things that could change on a moment’s notice to be no longer free, or to be completely illegal, alternately mystifies and scares me. What is constant is that I’m always amused at how the legal system perpetually moves at a proverbial snail’s pace to attempt regulation of the information sharing that has changed the face of mankind.

I think that, by the time they’ve caught up with our current position, that we’ll be decades further ahead. Which leads me to wonder: what does this sort of information and artistic availability look like with a wholly incapable system of regulation in place? I think we will continue to see the answer to that question play out in the years to come.