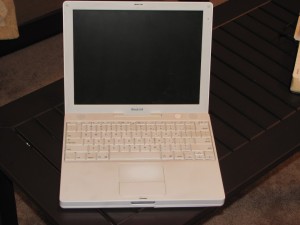 I’m not going to say what the news article in question was, because doing so would ignite some sort of political discussion in my comment chain, and I don’t do politics here. The offending thing, I’ll simply say, was provocative in it’s writing…not only the headline, but also the abstract. With very little storytelling imagination, I could picture how the actual interviews and press releases involved in composing the story were woven together in a manner that was completely untrue to the reality of the situation in order to get more shock value out of the copy. And, of course, the comments on the story exploded in vitriol.

So, this isn’t a post about politics, its a (brief and ranting) post about journalism. It’s been quite a few years since I’ve done any formal journalism, but the basic tenants haven’t changed. I long for a differentiation in our media between the specifics of “news” and “opinion.” Opinion pages are for the types of things that most of us read and write in blogs. The news is the facts, and “just the facts,” leaving us to make up our minds on the situation for ourselves after being well-informed.

Or, at least, that’s what news should be.

Instead, its a difficult arena to navigate. There are more obvious offenders than others…media outlets that at best slant the facts (by doing reporting that isn’t well-rounded) toward their political preference, or, at worst, completely fictionalize accounts and re-interpret history in order to achieve ratings.

Media outlets, though, shouldn’t have political preferences, at least not that influence their stories. Philosophically, relativism really doesn’t enter the realm of conveying empirical facts. A sequence of events either happened or they didn’t, and careful examination will reveal the manner in which they happened.

Part of the issue is the desire to beat other media outlets to the story, to be the first to report something…which leads to errors in reporting facts that cause undue problems and emotional ramifications. And, while I’ll concede that this might be a bit of a political statement, that’s why I think that for-profit journalism is not a good thing. Ratings and clicks are money, and pursuing more money while attempting to be true to the story leads to a conflict of interest.

The result of slanting the news…which I’m defining here as reporting opinion as fact…is that large numbers of people are swayed to support causes or platforms that they would likely not support were they simply receiving facts to analyze for themselves. And, don’t get me wrong, I’m not removing individual responsibility from the equation. America is certainly a nation losing its ability for critical thought.

Even the most critical of thought, though, can be swayed with a good performance. I’ve directed a lot of plays. There’s a certain power that a theatrical performance holds over an audience once that audience experiences the “willful suspension of disbelief” that is critical to appreciating the story. When journalism takes the role of a performance, it wields a power for which it is not worthy. Statements of social ills are the realm of the performer or the opinion writer. Statements of fact are the realm of the journalist.

I really wish that all sides would get those facts straight. 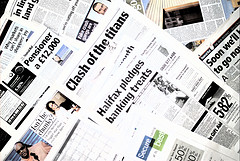 I think it was around a year ago that my friend Katherine introduced me to the Story of the Week blog, and it went immediately into my RSS reader. The blog is a project of the Library of America, and offers a free, downloadable piece of fiction, poetry, dispatch, etc. each week. Take what you want to read, leave what you don’t…I periodically find myself dropping their weekly offering onto my e-reader for future perusal.

Twice I’ve read true crime pieces from this site, including this weekend. This most recent piece was a re-print of the journalistic account of a grisly murder in Iowa in 1900, and is collected in True Crime: An American Anthology.  At 17 pages, its a fast read, and was an intriguing way to end my weekend.

Reading this collection of newspaper articles by the same journalist, I was struck by the writing style. I’m amazed at how the quality of writing in articles from 1900 is so much better than articles written today. The pacing, the use of language, the vocabulary…all of superior quality. I realize, though, that newspapers, which are only one generation from extinction today, were the primary means of communicating events at that time, and people sat down to read these true stories that were occurring around them. Just as today’s video-based or radio journalism  continues to hold an entertainment component, so those stories were told in a such a way as to present the facts in a manner that kept the reader engaged. This was not the inverted pyramid of print journalism as we know it. This was storytelling.

While these accounts seemed a bit sensationalist is their own right (perhaps its impossible to do journalism without a touch of this), I found myself thinking that I just don’t read this quality of storytelling in journalistic endeavors any more. Even weightier news sources, such as the New York Times or the BBC, condense their offerings to make them more quickly read and more easily digestible. This is a product of an online culture, I realize, in which we seem constantly pressed for time as we scan information in increasing quantities, all the while hyperlinking across the Internet to this or that reference in the middle of an article.

There are still sources of good storytelling in our news media today. I typically find them in magazines more than mainstream news…publications such as the New Yorker or the Atlantic present commentary on current events with a more literary feel, analyzing aspects of modern happenings of which the reader was likely unaware. Of course, these publications are just that: commentary.  You don’t pick up the New Yorker every week for breaking news.

Now, I don’t think media outlets can find a way to package breaking news headlines in poetic language if they are to present them at the speed of our information age…at least I never found a way to do so in my journalism days. But, I think that more care with the language could be afforded. While commentary lends itself more easily to storytelling, I don’t think we have to divorce our news articles from the art altogether. There’s just something more substantive to the events of which we’re reading when this is done…they seem more real.

Perhaps another issue at play here is the fact that the distinction between commentary and news is now blurred in a confusing manner. I spent most of journalism days writing op-ed pieces. When I did so, they were separated from the news sections, because they were commentary, not news. The reader understood the difference by the column’s placement in the paper.

Today, American media outlets refuse to present just the news. They wrap the headlines in impromptu commentary and run their commentary as news. The result is not op-ed, but propaganda for the political leanings of a particular media outlet. No longer is the viewer or reader trusted to make up his or her own mind after being presented with “just the facts.”

Unfortunately, the public’s ability to do so will then atrophy, like a muscle that hasn’t been used in too long. Most viewers or readers don’t want to spend the energy to think critically about current events, even though they are perfectly capable. They want someone to tell them what to think.

And that is worlds away from hearing someone’s thoughts or reasoned perspective on an issue. Because that is real commentary, the stuff of good op-ed columns: a different perspective on the events at hand, presented as a perspective, and offered as thoughts to be considered.

I’m fascinated to watch as the line between journalism and commentary blurs, and takes the care of the language down with it, digressing into a psychologically-crafted collection of buzz words and persuasion intended to foster groupthink among the viewers, and resulting in inflammatory rhetoric that only does harm, and not good.

We really need a return of good, balanced storytelling. And I don’t just mean in fiction. Because we really are smart, folks. We really are capable of thinking for ourselves and making up our own minds about the issues at hand.

We really don’t need someone to cross the line and start thinking for us.