While slowly but steadily unpacking our new house, we began making plans for a family Halloween party. If you’ve read my brain dump here for very long, you’ll know that I’ve never been a fan of Halloween, at least not since coming to faith almost two decades ago. While I love an excuse to get into a fun costume, Karen and I generally avoided it early in our marriage, typically just going out for dinner during the trick-or-treat window. When we had kids, though, it’s difficult to tell them that they can’t participate in this event. And, one of the selling points of the new house as they were struggling with anxiety about leaving the old neighborhood was that we would be moved in just in time to go trick-or-treating in the new neighborhood.

This year was also, for a variety of reasons, my first time ever carving pumpkins. I’m proud to say that I did a fairly decent job, but…you be the judge. 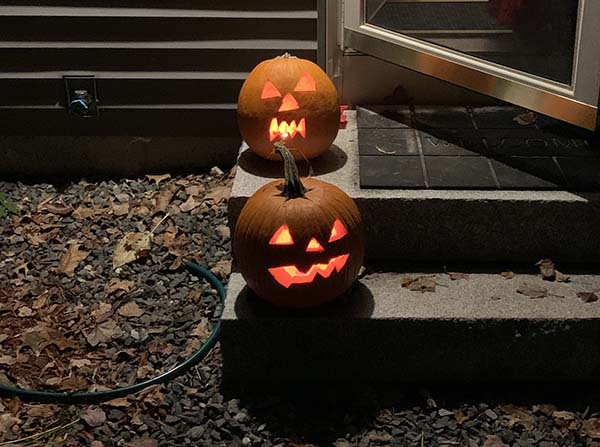 A couple of years ago, we purchased It’s the Great Pumpkin, Charlie Brown in the days leading up to this holiday-that-isn’t-really-a-holiday. The kids have grown quite attached to it, and, I must admit, I’ve started to look forward to viewing it each year, as well. This year, though, because the kids are of an age where everything must be watched multiple times, and thus I heard a perpetual loop of the subject matter for three days, I began to notice the theology of the Great Pumpkin.

You have to feel badly for Linus in this story. He’s the lone believer in the Great Pumpkin, an odd distortion of Santa Clause, and he’s mocked mercilessly for it. Perhaps because of the striking and inescapable fact that the Great Pumpkin as a concept if such a cheap facsimile of “the real event” that is still two months away, his friends think that he has lost his mind, or at least has beliefs that are subject to, as Charlie Brown states, “denominational differences.” All except for Sally, whom he convinces to keep his vigil with him.

We all know the end. Linus is left disappointed, earning Sally’s ire and his friends’ mockery, all while being horrified that he will be passed by because he used the word “if.” After all, the Great Pumpkin only rewards the utmost sincerity, and there can be no room for even the slightest slip of the tongue if one’s faith is to be rewarded. I feel sorry for Linus. As he looks toward an obvious imitation of the truest event of Christmas, he finds that the pressure is on him. It’s not about what the mythical figure that he looks to does, it’s all about what he is doing, and he will inevitably fall short. There’s always theology at work in the classic Peanuts specials, playfully packaged for us to digest, and this particular special shows us the fallibility of a theology of works. Linus’ ultimate faith experience is about his own efforts. He isn’t looking outside of himself.

The end of this pseudo-holiday special is touching…as we see the clock at 4a.m., Lucy goes outside to find Linus shivering in the pumpkin patch. She has mercy on her brother, and leads him into the warmth of his room where he falls sound asleep. Linus has been devout, but believes himself lost because of the smallest error. We have to believe that his sleep is fitful. I have to wonder, here, if Lucy is demonstrating a deeper faith than her brother, as she shows mercy on someone with whom she had the most intense of debates just hours earlier. She loves her brother, that is evident, and that goes deeper than any “denominational differences.”

There’s much that we could learn from this Charlie Brown special. I think that Lucy’s actions in the final scene are something that would be of a most urgent importance for us to grasp today.