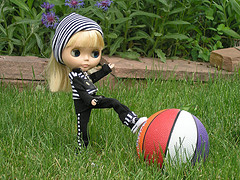 Because I married an amazing woman whose master’s thesis was in the discipline of rhetorical studies, I’ve become sensitive to the types of rhetoric that appear in day-to-day life. It’s helped me as a writer, because I’m increasingly able to see and hear what an author is doing with a novel, or a screenwriter with a movie or television episode. Like all knowledge, though (to borrow Lawhead’s phrase), once it’s taken up it can never be put back down. So, now, I hear interesting rhetorical choices used everywhere.

One type that always stands out to me is the rhetoric of athletic competition. I think that the reason it stands out so much is because I’m no athlete (try to hide your surprise), and so it misses making its intended effect on me. It stands out everywhere, though…even Forbes magazine included some athletic rhetoric in its list of most annoying business jargon.

It’s interesting to me because, although I’ve never been anything that could be remotely compared to athletic, I still enjoy watching a good basketball game as well as the next guy. I was a huge NBA fan for some years, peaking during my undergrad days, and I remember some statements made by the players in ads that I thought were quite interesting as philosophical perspectives: things like, “the ball won’t come to you, you have to go get it.”

And I think that there’s a place for this level of competitiveness, primarily in the sense that it’s motivational when undertaking a difficult task. In all, though, I guess I think that the competitiveness is too universalized, too ingrained in the national psyche for our own good (need we look any farther than the violence in our own neighborhoods?). I can see how this type of language finds its way so easily into business culture, because that’s a world of cutthroat  and merciless tactics, the goal of which is to beat the other guy at all costs. But, really, isn’t that the sort of walk-on-everyone-else mentality that has been attributed to causing a great deal of national economic grief of late? I think we would do well to leave the athletic language on the court, instead of bringing it so broadly into other realms of life that are already occupying space in a competition-charged culture.

After all, competition is really about fighting…fighting to win, fighting to beat the other person, fighting to reach a goal, regardless of the obstacles. I’m all for reaching goals, but a little less acceptance of fighting would go a long way to fixing what’s broken in the U.S.  Don’t you think? 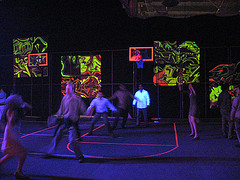 Over a dinner party with friends Monday evening, the conversation turned to athletics. Specifically, college basketball, and the commentary and analysis of Charles Barkley. A friend thinks his analysis of the game is incredibly in-depth and deserving of respect. I’ve never been able to stand Barkley, from the first time I saw him play to the time he retired from the Phoenix Suns. I suppose I was never really interested in his commentary. He just irritated me. My friend says that that he projects a “tough guy” image, but that he is very good as a commentator.

Sort of a character in a play.

When I was an undergrad student and incredibly involved in nearly every production that came down the line in my theatre program, I discovered that I was a bit of an anomaly amongst my fellow theatre students, because I enjoyed watching sports. Specifically, I liked professional basketball. I wore Orlando Magic t-shirts. They had difficulty understanding why, and I had difficulty communicating the theatrical thrill of the opening introductions of the players (light show included) through the (hopefully) nail-biting close calls and amazing shots that kept me glued to the screen.

I realized, even at the time, that learning to love basketball was a way to connect with my father. He had played basketball through high school and in college, and we had difficulty understanding each other. He didn’t really get the theatre thing, but he tried very, very hard, for my sake. I thought the least I could do was to work toward an interest in basketball, as a way to connect with him. It worked. It was the launching point for a renewed relationship with my father.

I haven’t watched basketball since a few years ago, around my first semester of grad school, I think, when the L.A. Lakers had an historic starting lineup and couldn’t pull out a championship season. I determined then that it had become about the individual players, and not the love of the game. Sort of like how a prima donna ruins a production by robbing the play’s cast of its camaraderie. In any cast, I haven’t really watched professional basketball since. Perhaps not so coincidentally, neither has my father.

I don’t think I’m all that odd for being a “creative type” that enjoys athletics (I’m still a big tennis fan). In fact, I have many artist friends who follow various athletic seasons with much more intensity than myself. I’ve theorized that there’s a theatrical quality to athletic competition, something deeper than just spectacle. The spectacle, though, was okay in itself, and I didn’t explore the thoughts too deeply.

solidified my theory that athletic events are, in fact, theatrical. The drama of the competition is, of course, the reason that those of us who watch sports are engaged (I’ve come up off of the sofa yelling at many a buzzer-beating shot in my life). Johnson says that this is framed, though, in the larger context of the story…the “through-line,” if you will…behind the game. Michael Jordan’s incredible game winning shot was incredible in itself, but stunning against the backdrop that it won the game at the last minute, and that it was the last game of his career (well, until he returned from retirement), and that he had succeeded despite the family tragedy he had experienced. Johnson says that this story is told through the commentary surrounding the actual competition of the game, and attributes this to the explosion in popularity of various sports commentary media outlets in recent years. I think this is also why many sports fans remember specific games like we remember great movies or plays, looking back to a particular performance with great nostalgia. Following the stories can have a positive impact on the audience, such as my relationship with my father. Participating in the story builds a camaraderie that is easily equivalent to the cast and crew of a play.

So my love of watching basketball was no contradiction to my theatrical bent. I was simply a spectator to a different type of theatre, one that told the drama of fellow humans in the same time but a different space, rather than fictional characters. I’ve always suspected that theatre explains a great deal of life. This just goes to prove that point.