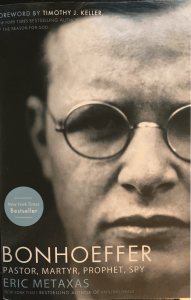 Ever since seminary, I generally read something either by or about Dietrich Bonhoeffer at least once annually. Bonhoeffer remains one of the most influential theologians to my thought and spiritual life, and, as most know, the story of his life and martyrdom is compelling and powerful. After a few years, I’ve read almost all of his work, as well as a good deal of work about Bonhoeffer. I had always avoided Metaxas’ biography, though. I’ve always wanted to read it, as it’s recognized as the authoritative biography on Bonhoeffer’s life. To be honest, the sheer weight of the volume is off-putting. I’m not sure I’ve read something that long and that dense sense (ironically) reading Barth’s Church Dogmatics in seminary (the running joke was that not even Barth had read all of those volumes).

And that comparison is not altogether trivial, because Metaxas does his share of theology in this book. There was some controversy, as I recall, when this biography was initially published, because Metaxas was said to have asserted, against traditional perspective, that Bonhoeffer was not a pacifist. That alone is compelling reason to read the book, but, as I said, just hefting it from the shelf in the bookstore is enough to give one pause unless you have a magnitude of free time on your hands.

Of course, a lot of us have more free time than usual on our hands due to world events lately, so I decided that it was time. I am so, so very glad that I did.

Let me say up front, if you haven’t assumed this already: this is not an easy read. The difficulty lies not in the writing style…Metaxas avoids being overly academic and I found his style to be very approachable, although he is given to a strange change of voices at times. The difficulty lies in the subject matter. You can’t study Bonhoeffer’s life and thought separate from the historical context, and WWII Germany is not an easy historical period to study. This is also one of the gifts of this book, though. I have learned more about this period of history, as well as the events that lead to it, by studying Bonhoeffer’s life than I did in any history class, but Metaxas takes this a step further. The reader walks away with a historical education as an added bonus for their time.

This speaks to the strength of the biography, and what ultimately makes any biography great: the depth of the research. Metaxas’ research is meticulous. He has obviously spent time with primary sources and studying the available material to an extent that most academics would envy, and it shows in the nuances of his record. One of the reasons that this is a heavy read is because you don’t just move through it at a normal pace, but rather you frequently need to stop to really digest what you’ve just read, to begin putting together disparate pieces of the puzzle of a man’s life into a cohesive whole. You begin to see how all of the pieces fit together, to truly see a portrait of Bonhoeffer’s life. Metaxas walks us through minute details of Bonhoeffer’s childhood and family background, through his experiences in traveling the world, to the best sources we have of his last moments before he was martyred. The depth of the image we have of Dietrich Bonhoeffer after reading this book is why it is considered the primary biography on this influential theologian.

I truly appreciate that Metaxas pauses regularly to unpack Bonhoeffer’s theology. All examination of Bonhoeffer’s thought is given to some speculation, because he didn’t live long enough to fully formulate his theology. His thoughts as we have them, though, are nothing short of prophetic, especially within their historical reference, and the reader gets to spend time with them here. Metaxas specifically walks through Bonhoeffer’s popular concept of “Religionless Christianity,” what he is convinced that it meant in its context, and how it has been so drastically misinterpreted by modern theologians (I happen to agree fully with his assessment).

I think that the only place in which this amazing book didn’t do what it says on the tin is to convince us that Bonhoeffer’s label as a pacifist was inaccurate. Metaxas actually works against his own assertion here by quoting one of Bonhoeffer’s colleagues from his time at Union Theological Seminary, in which his colleague identified the moment in which he realized Bonhoeffer had become a pacifist. Metaxas moves forward seeming to provide the support for his claim to the contrary as he puts together Bonhoeffer’s life, but ultimately makes an assertion late in the book that feels to not be supported by evidence. In short, Metaxas says Bonhoeffer was not a pacifist, because he was a spy willing to commit assassination. I’m not convinced. What we do see is what is to be seen from thoughtfully scrutinizing Bonhoeffer’s life, and that is a man struggling with the weight of an incomprehensible evil and how to reconcile the abhorrent actions that he concluded must be taken with his faith, concluding that not acting for fear of doing wrong is the greater sin. The depth of the struggle is felt by the reader in all of its weight, and this is a great credit to Metaxas’ work.

Placing “Bonhoeffer” on my shelf was one my top accomplishments this year. I think that it goes without saying that I would recommend this book for anyone, not just those who have previously found Bonhoeffer’s life inspiring. Yes, it is intimidating, but it is also very much worth whatever time it takes to complete this book. Your spiritual life will be better for the effort, just as all of our lives are better for Bonhoeffer’s thought.