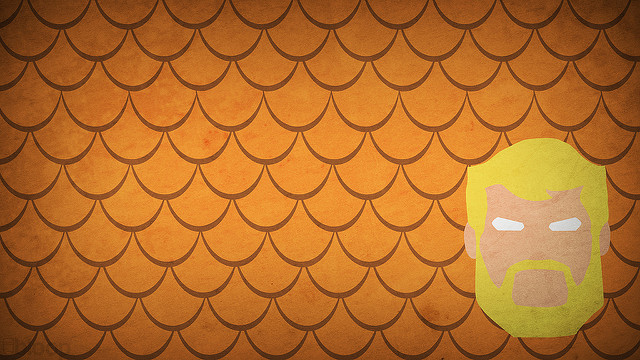 I confess that I haven’t been sold on the striking, “tough guy” image of Aquaman that has appeared in the DCEU films beginning with Justice League. To be fair, Justice League wasn’t exactly a terrific debut for any character as it was a waste of film overall, but, deeper than that, I’ve grown attached to the Arthur Curry we met during DC’s New 52 reboot 7 years ago, and that is the image that stuck. The blow was softened a bit by comics artists recently beginning to depict our aquatic hero with long hair to give some consistency between print and the film, but Aquaman is just difficult to sell as a tattooed, beer drinking, self-described “blunt instrument.”

Still, our hero is from New England, which gives him some home court advantage, and Wonder Woman proved that DC is capable of producing good films after all, so I gave Aquaman his chance this weekend.

I was unexpectedly surprised.

The key word there is “unexpected.” The movie is unexpected in many ways. First off, it’s very well written, with only a couple of unexplained or under-explained moments that, for the most part, I was willing to overlook as a genre convention. Geoff Johns is behind the story, and thus we can expect that the characters be treated with care.

Still, I found the inconsistency in character in events at the beginning of the movie to be jarring, as Curry leaves a pirate to die aboard a sinking submarine because that pirate has taken innocent lives. While this is loosely consistent with the source material regarding the origin of Black Manta (our secondary villain for the film), the intentionality of the act is disturbingly out of character, and decidedly un-heroic. I think that the goal here is to develop the results of a childhood without a mother and Arthur Curry’s resulting rebellious outlook on life, but I think that it still does violence to the character. There is repentance in the end on Aquaman’s part, or at least a hint of it, but this still walks dangerously close to destroying the film before it even gets started.

The world building here is beautiful. Atlantis is breath-taking, both visually and in the depth of culture that is revealed. This is quite possibly the movie’s greatest strength, as the audience is drawn completely into this world beneath our waters and its ancient history.

Perhaps Aquaman’s largest flaw is that it’s overly ambitious. This is the story of a would-be king fighting for his kingdom and a throne that he doesn’t want. It’s also the story of a man coping with his tragic childhood, with the two concurrent sub-plots of a romantic interest with Mera and the development of Black Manta. The film is around two hours and 20 minutes, but could easily have been twice that to give all of it’s plot points sufficient time to unfold. As is, it skillfully maintains the story, but comes very close to not doing so on numerous points. That is, the movie nearly derails several times because there just isn’t time to unpack everything, but then manages to tie some things together with some well-written dialogue and move on to a climactic battle. Still, a bit too close for comfort. I almost wish that Black Manta had been introduced in his own film later…we still would have had more than enough to enjoy in this one.

I enjoyed the interactions between Arthur and Mera, who is portrayed very consistently with the comic, and actually very well acted by Amber Heard. I hope that she continues to be featured in upcoming films, as well, and not relegated to a side character in only a few.

All in all, Aquaman is a surprising success. I’m actually not entirely certain how they managed to pull off as much as they did in the time frame, but this film continues to move the DCEU in an upward  trajectory. You should make time to see it over the holiday, especially if you only remember Aquaman from those old Super Friends cartoons, and re-imagine the underwater hero that never quite received the respect he deserves.