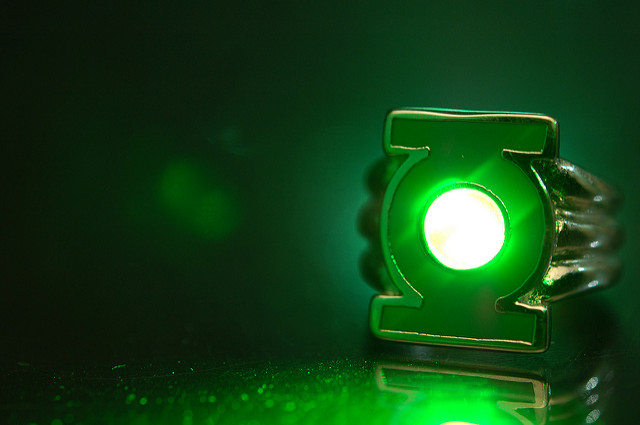 A few years ago (has it really been that long?), I spent a lot of time putting thoughts together here on the nature of a hero. Those conclusions still spring to mind for me occasionally, and, given some recent events in my life coinciding with just finishing a Green Lantern novel that I picked up on vacation last summer, it came to the forefront again.

The novel isn’t the best I’ve read, but O’Neil does, by the end, give us a compelling (though somewhat non-canonical) telling of Kyle Rayner’s beginnings as Green Lantern. The story begins slowly, but the author is giving us a very important point by the end.

In the DC Universe (pre-New 52), Kyle Rayner was the second Green Lantern on earth. He is given the power ring by the last surviving Guardian after the original Green Lantern, Hal Jordan, goes crazy and retires when he is unable to save his home city from destruction. The Guardians have vanished, and Rayner, a struggling graphic artist with little drive or ambition for anything in particular finds himself, without explanation or instruction, in possession of what is arguably the greatest source of power on the planet. Rayner now wears the mantle of one of the most formidable heroes in the DC Universe.

You can see where this gets interesting.

And, while it moves slowly in places, O’Neil does well at extensively relating Rayner’s internal dialogue as he struggles to first understand his power, and then to decide if he actually wants anything to do with it. The short answer is that he does not. Whatever aspirations he might have held, none of them included placing others’ good before his own, rushing into danger in order to protect others. This just isn’t him, not a position in which he has ever envisioned himself. Yet, now he is confronted with something bigger than himself, something outside of himself.

Quite literally bigger in this story. When the rest of the Justice League vanishes, he is the only one left save reality from destruction. As the story progresses, Rayner makes numerous choices to move beyond himself, to act sacrificially to save others, others who aren’t always even human. He doesn’t begin a hero, but becomes heroic in how he handles the responsibility that is thrust on him.

The author’s moment of brilliance, I think, in this novel comes just before Rayner embarks into the final epic conflict, when he tells the Guardian who gave him the ring:

“I’m a hero because you gave me something heroic to do.”

When I’ve talked before about the nature of a hero, I’ve frequently arrived at the conclusion that there is a decision point in many of these stories. Given a set of circumstances, how a character handles a choice determines whether or not that character becomes a hero or becomes a villain. When Rayner is confronted with a huge responsibility, he doesn’t run away, but chooses to embrace it, despite the fact that he does so clumsily and against his own instincts.

This is one of the most accessible aspects of the nature of a hero because it is something that we all face at some point. While we will likely experience this in a small way, we will be confronted with a responsibility that we didn’t choose and that we don’t want. Our reaction speaks to our choice to become either a hero or a villain in our own story. The reaction is never easy, the choice never without repercussions. It is always, however, necessary.

The inspiration to make the heroic choice is why these characters give us so much.