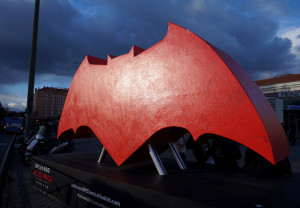 I was sort of numb.

Really, that sums up my entire journey with this film, from the first teaser all those months ago, to leaving the theatre this week. To be honest, it began with Zack Snyder’s less-than-impressive Man of Steel, the entire purpose of which seemed to be “how dark and brooding can we make Superman?” Superman isn’t a character that’s particularly dark and brooding. In fact, while recent incarnations of the character have made good efforts toward the sorts of questions with which someone with his level of power would struggle, he remains sort of the antithesis of darkness.

Really, that’s what should position him opposite of a character like Batman, who, when written well, is always walking a very thin line between hero and vigilante, at times not in full possession of his faculties, struggling with a trauma that would overwhelm someone without his sense of purpose.

And, when permitted to develop, those sorts of distinctions can be fascinating. There was none of that after this movie, though. I was just numb.

The numbness wasn’t born simply of the overwhelming darkness of this 2-and-a-half-hour mess (many critics have noted, with some exaggeration, that no one smiles in this entire movie. In Snyder’s defense, there is one scene where Lois Lane laughs with Clark Kent, but that’s just to relieve tension from his brooding). The numbness was caused equally by the sheer speed at which this film moves.

Comics have a phenomenon called the gutter. That is, something often happens between the image in one frame and the image in the next. The reader’s imagination fills in the gutter. In order for this work, one must be aware that there’s a gutter to fill.

Superman’s adventures, both in rescuing Lois Lane (a perpetual damsel in distress instead of the strong character that she should be) are disconnected. Only knowledge of the previous movie leaves any idea for the viewer as to why he’s struggling (or, for that matter, why the public is struggling) with who he is and what he can do, and even that is fragmented. Superman is just generally unhappy with life, here, and we can only guess why.

Now, let me say up front that I have always been a huge fan of the Dark Night Detective. His is a character that has so many possibilities when done well, so I’m even more sensitive to a poorly written adaptation of Batman than I am of Superman. That personal issue aside, though, let’s understand something about comic books that makes what Snyder did with the character incredibly risky and, in the end, an incredible failure.

In comic book literature, there’s an event called a retcon, or “retroactive continuity.” In a retcon, characters are taken in dramatically different directions, and writers often explore various “what-if” scenarios and facets of a character that would otherwise be left undiscovered. Retcons, when done well, are really interesting journeys. In 1986, Frank Miller, arguably one of the greatest writers in comics, published a miniseries called The Dark Knight Returns. In this retcon, set in a future Gotham City, Bruce Wayne has retired as the Batman, and he’s gone a bit insane. Batman has become a second personality, clawing to get out, with Wayne holding him at bay. Eventually confronted with a horrendous crime wave in Gotham where unspeakable acts of violence are taking place, Batman resurfaces, except, this time, he hurts people. He uses firearms (something that he swore never to do because of how his parents were killed). Superman is essentially an agent of the government in this story, and is sent to bring Batman under control. The battle ensues.

Dark Knight Rises was also influenced by this miniseries, but didn’t alter the character to fit.

The issue here is that a retcon never works in the mainstream continuity, and this movie is supposed to launch the Justice League franchise for the DC Cinematic Universe. This is to DC what the Avengers have been to Marvel. This movie defines the mainstream universe for the film, and it was written based on a retcon. By definition, this doesn’t work.

So, I expected to not be impressed.

Let’s suppose, for argument’s sake, though, that this could work. One of the reasons that Miller’s story was so compelling is because we see how Batman ended up as angry and disturbed as he is. Snyder gives us no such reason. There is a brief glimpse of a Robin costume in the Batcave with words scrawled across the front. Batman readers will assume that this is indicative of a well-known event in Batman’s past where the second Robin is killed by the Joker. We don’t know for certain, though, because this is never explained. There is also a brief line of dialogue by Alfred (who is something other than a butler, here…who knows…) about cruelty resulting from a feeling of powerlessness. Certainly, Batman has felt powerless as the conflict between Superman and Zod in Man of Steel left many of his friends dead, and this would be more compelling if we weren’t pushed through the memory so quickly. These events, though, are the only explanation we have as to why Batman hates Superman, why he wants to kill him, and why he is vindictively harming criminals, and they seem to somehow fall short of the end result.

A hate-filled character with such little backstory…particularly when that hatred is superimposed on a character that we know is not normally possessed of this trait…is more than difficult to accept. It just doesn’t work.

This is to say nothing of the machine guns on Batman’s vehicles, or his willingness to use villains’ firearms against them, one scene of which nearly made me walk out of the theatre I was so disappointed. This is tremendously out of character. Adapting a character and re-writing a character are two different things. Snyder apparently felt justified to do the latter.

The fast-paced disconnection doesn’t stop, there, however. There are dream sequences that are bordering on delusional and add nothing to the film except an excuse to portray Superman as a warlord and Batman as a gun-wielding purveyor of vengeance. Batman’s sudden change of heart in the end of his conflict with Superman is so abrupt and without motivation that it leaves one with emotional whiplash.

The film isn’t without positives. Eisenberg’s performance as Lex Luthor, which I expected to be disappointing, was gripping and a pleasant surprise. The combat sequences were well-paced, making for the sort of fan-boy matchup that a large part of the audience was expecting to see. Certainly, Snyder excels in visual storytelling. If only a fully-developed plot and fully-developed characters had been there to accompany his visual acuity.

Of course, one of the aspects of this movie that fans were eagerly awaiting was the appearance of Wonder Woman. I’ve talked before about how important a character Wonder Woman is, and I wasn’t impressed with the choice to cast Gal Gadot in the role. This was another pleasant surprise, however, as Gadot brought a good performance. Still, there wasn’t time for her to do anything other than fight for the brief five minutes in which we see her as Wonder Woman. Again, this moved too fast. Of course, the over-arching problem with Wonder Woman here is that she is one of DC Comics’ three most important characters. Introducing her in a minor role in someone else’s film is simply unacceptable.

There has been a conscious decision here move in the opposite order from what Marvel did with the Avengers. That is, the Justice League is beginning with a team film, and moving forward from there, without giving most characters their own films to begin with. This is a great idea, but it isn’t working in execution, because there simply isn’t time to develop major characters in a team film. Our glimpses of the rest of the Justice League here happen…you guessed it…very fast, in one case condensing an origin story into about 30 seconds, and leaving a good deal of the audience confused, I imagine.

By the time we see Superman’s rushed death in the end, I wasn’t just numb, I was completely numb. Partly because it was so rushed as to feel fake (although fans really should have seen this coming knowing that Doomsday is the villain), and partly because we know that a Justice League film can’t be made (I certainly hope they don’t try) without Superman. So, this was an emotional stunt to bring back viewers.

I left the theatre feeling nothing at all, hurried to a state of being completely anesthetized. After a couple of days, I felt profound disappointment. I’m a big fan of these characters, and I really wanted to see them done well. This film places the entire Justice League franchise on extremely shaky ground.

I hope it recovers.