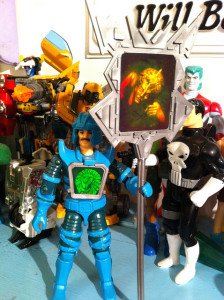 One of the things that made living in New England so comfortable for me was the widespread geek culture. Comics, superheroes, science fiction, high fantasy, Steampunk…whatever your interests, there were groups of commonality. Wearing a t-shirt bearing the answer to life, the universe, and everything brought acknowledgement from the person taking your order at the local Five Guys.

In the South? Not so much. You receive some interesting chuckles, but…let’s just say that I’ve met many fewer Bronies in Raleigh than I met in Boston.

While I generally don’t wrap up an excessive amount of my free time in these sorts of geeky associations…that is to say, attending conventions and cosplaying aren’t currently in my list of hobbies…I find that the lack of common interests with people makes socialization difficult, even more difficult than it normally is for an introvert. Thusfar, I’ve met two people wearing Dr. Who costumes, and that was on Halloween. The geek ratio here is low.

When I was young, I enjoyed an animated program called Visionaries. The heroes were “Knights of the Magical Light.” It was (obviously) a fantasy piece. Each character had an animal counterpart that represented their personality, and into which they could transform. In addition, some characters carried a staff…a totem of sorts…that released a personified power: speed, strength, the power to shield others…you get the idea. One of the knights possessed the power of wisdom, and another the power of knowledge. These balanced the more physical powers…anyone knows that a healthy team of heroes needs to have these sorts of abilities in its ranks.

I had never explored the difference between knowledge and wisdom at that age…in fact, I largely treated them as synonymous until confronted with the likelihood that they were different concepts, as they were here represented by different characters. So, I began doing some research. I forget where exactly I did this reading…probably in the rather expensive encyclopedia set in which my parents invested for me when I was young…but I learned the difference between knowledge and wisdom. I then knew an important concept, thanks to the ideas presented by animated heroes. Not just trivia, mind you, but an important concept that would later even bear spiritual significance.

There’s no deep meaning to this story, other than to say that really important things can come from fun childhood entertainment…the sorts of interests that can stay with us into adulthood, and mark us as geeks.

My disappointment with the South and the noted lack of any sort of geek sub-culture here isn’t some warm and fuzzy need to belong and be accepted, although I find those things as nice as the next person. It’s the mentality that I encounter…a sort of underlying attitude…that these sorts of hobbies lack maturity or that they’re excessive escapism, a perspective easily disproved by the wealth of academic research out there on topics like the philosophy or theology behind various superhero story arcs.

Good art is good art, and there are always subcultures that grow up around it. Some of these subcultures can very much become obsessive to an unhealthy degree. Most of the time it’s not that. Rather, it’s those of us who weren’t the cool kids in school and who now have found a way to make a living doing things that we love, and who resonate with the deep, pervasive aspects of the human condition illustrated by these stories and characters. It so natural to identify with certain characters, to see the good in ourselves, and perhaps the good that we wish we could convey.

Or to respect them as the medium through which we learned important concepts about life growing up…knowledge that has hopefully led to wisdom.