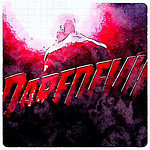 It shouldn’t be any secret that I started reading comics when I was very young. While the X-Men were really my first comic book experience, the were a gateway drug that led me to many other adventures in the medium.

I couldn’t tell you how old I was, but I remember the afternoon clearly. My mother was sitting in the other room with someone who was selling magazines…I think it was a neighborhood kid selling them as a school fundraiser or something like that, but that sort of fades to the background. Mom called me into the room and showed me pages of Marvel comics that were available as subscriptions. She told me that I could choose one.

My heart skipped a beat. Any title that I wanted, delivered to our house every month?? This was utopia. I remember carefully perusing the options available. This was huge, an important decision. I eventually selected a title of which I had only read a couple of issues at that point, but one which had intrigued me. Daredevil: The Man Without Fear.

For the next year, the issues arrived, wrapped in brown paper, and I devoured them. I played Daredevil, hurling pretend billy clubs at imaginary foes. There was something about the character that fascinated me, and, though my reading interests went elsewhere over the years, Daredevil was always one of my first long-term relationships with the Marvel universe.

I love that enterprises such as Netflix are beginning the adventure of creating their own series and movies, rather than being beholden to an antiquated industry that controlled creative expression and it’s distribution. Because I, like most fans and serious readers, sort of just pretend that Affleck’s feature film as Daredevil didn’t really happen, I was thrilled at the announcement that Netflix was releasing an entire season of a live-action Daredevil series at once. This actually sort of saved my Netflix subscription, because, as their access to films seems to be dwindling, the sure way to keep me subscribed is to promise numerous original series of comic book heroes. I had high expectations for the series, as Marvel Studios has produced such incredibly high quality work of late.  I had read interviews with the director discussing how the approach to directing a series in which most viewers would be seeing multiple episodes in one sitting was very different. On release day, I blocked off my schedule. This was taking me back to one of my first loves in comic book literature, and I couldn’t wait.

The writers stayed remarkably true to the original story and characters, developing each in a thorough way. The series was remarkably character-driven, and each action sequence was complimentary, with no fighting as a primary through-line. This is the mark of a well-done comic book story on the screen, because it’s all too easy to allow shallow plots and well-choreographed combat to dominate at the expense of characters that have realized so much potential on the page. When these compelling characters are allowed to guide the story arc, fascinating explorations of the human condition can occur. This is precisely what Netflix has allowed to play out in these thirteen episodes. So much of the nature of a hero is explored here. What differentiates a hero from a vigilante? What are the ethics involved in taking the law into one’s own hands? What is the obsession that would drive someone to push away his friends and loved ones in a tunnel-vision quest for justice? These are some of the ideas that are unpacked at length in this series.

Something with which I was particularly impressed is the time that was given to dialogue and character development. When you essentially have thirteen hours with which to work, the opportunity to develop characters and play out  dialogue is just so much greater than what one could do within the confines of a 2 hour film. The exchange between Matt and Foggy after Foggy has learned Matt’s dual identity is given most of an episode. The quality of the writing of this series is also extremely high (the Kingpin’s speech, “I am the ill intent,” in the final episode is positively chilling).

Part of what’s so interesting about a character like Daredevil is his motivation. Matt Murdock is less motivated by defending others than he is forcibly stopping evil. He denies being a hero one episode, and in another asks his priest why God “…put the devil in me.” While Matt Murdock is troubled by what he is doing and wrestles with its consequences, so has the Kingpin wrestled, and determined that he is pre-destined to be evil. Both compelled and unable to stop, each on opposite sides of a moral and theological divide. This is just the stuff of which good superhero narrative is made.

My chief complaint with the series…and the only reason why I would not recommend it to all audiences…is the overly gratuitous violence in many of the fight scenes. While these scenes are necessary and are not forced onto the narrative, they are filmed in a way that seems focused entirely on shock value, and actually (and sadly) detract from the excellent story being told.

Overall, this is an excellent addition to the Marvel canon and continues forward the creative manner in which Marvel Studios has crossed their universe over between film and small screens. Daredevil is apparently to launch a new section of the Marvel Universe for viewers (Defenders, anyone?), and it has most certainly set a high bar for all comic book television series moving forward.

For anyone interested in the character, or already a fan of Marvel on the screen, this is a series that you’ll want to watch. If you’re a bit squeamish of a higher-than-expected level of blood with your adventures, then proceed with caution. Daredevil is not for the faint of heart.