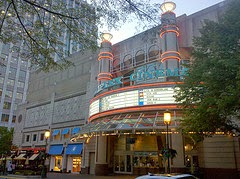 Think about some of your favorite movies. Do you remember where you saw a particular film? I mean, what theatre you were in? What city? Who you were with?

I don’t recall these details for every movie, obviously…like you, I’ve seen quite a few in my life. The very influential films, however, stand out in my mind (read: nearly every superhero movie), and a few others, as well. Perhaps it’s more noticeable lately as the theatre experience grows progressively less prevalent and more of our viewing occurs on our own schedule and on our own screens. Still, most of us go to the large screen at some point to see a new release…at least a few times a year, although I wouldn’t have statistics to prove that…and that few times a year becomes more memorable to us as it become less frequent.

So…maybe the decrease in frequency is a good thing.

Each year for Christmas, I get a couple of DVD’s that I requested, favorite movies that I saw during the course of the year. This is a family tradition of which I am the sole beneficiary, and I have no regrets. For the last couple of years, I’ve noticed that I’m able to recall the theatre in which I saw every movie that I’ve received. The mid-sized New England town in which Karen and I lived just before our move South in which we saw Thor 2 and Captain America, the North Shore theatre in which I was profoundly disappointed in Days of Future Past with a friend, the nearby showing where Karen and I were swept away by Maleficent and the theatre here in North Carolina where we were surprised and impressed with Guardians of the Galaxy.

Now, certainly I’ve been easily prone to nostalgia here of late, but I don’t think that’s the case this time. I think that movies are just the culprit that I notice because of the afore-mentioned decrease in frequency of trips to the theatre. It’s become an unofficial journal, of sorts.

I firmly believe that there’s an atmosphere to a particular geographic location, something that I offhandedly refer to as it’s “vibe,” that shapes our experiences while in that location. While my thoughts on comic book mythology have grown and expanded over the years, the discussions and thoughts that I’ve recorded while living, for example, in Virginia, are a bit different than the ones I recorded while living outside Boston.

There’s a concept of the theology of place. Oversimplifying, the geographical locations in which we live are shaped by different local histories, cultural norms, even climates. These things impact how people living there interact interpersonally, intrapersonally, and theologically. What might the norm for interactions in New England could well be considered offensive to our friends in the South (something of which I find myself constantly on guard). Our ideas of each other, our ideas of our activities, our ideas of God…our ideas themselves…will manifest differently based upon the sculpting influence of our environment.

So, where we are isn’t just where we are. We will carry the way it shaped us…and the way that we shaped it…forward with us, a part of who we are, of how we think, of our life experiences. That’s why living in different places and experiencing different types of relationships is so critically important, and why humanity is the better for our ability to do so.

It’s also, I think, why recording reflections on these sorts of things…even if it’s only thoughts on the movies, for example, that we’ve seen…in a place where we can come back to them is so very important.

I want to be able to remember the locations of all manner of things that I’ve experienced, not just movies, because of the other memories that this triggers. The people and places of my life are so important, things to pass on to our daughter and to re-live occasionally ourselves, but also a starting point to help us remember that we shouldn’t be afraid of the past, shouldn’t dwell in what may perhaps be temporary negativity in the places where we live, and give us courage, if nothing else, to know that, based on prior experience, our current situations will all turn out to be okay.

Wherever those experiences happen to be occurring.