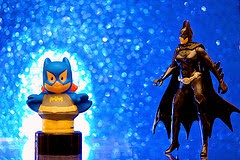 Our daughter’s obsession for about the last year has been Thomas and Friends. We allow a very rationed amount of screen time each day, and are quite picky about what constitutes that screen time. Thomas has impressed us, because each story is a morality tale. She’s receiving good lessons along with entertainment.

Sadly, the Emily that we purchased at Christmas was broken when we opened her, and had to be returned. That particular figure is apparently rare, and we hadn’t found a replacement since. Randomly, last weekend, I took our daughter into a store specifically to check the Thomas collection. She always finds several that she wants to take home, to be followed by a discussion of how that can’t happen at the moment due to budget. At first glance, I found nothing. I dug. I persevered. Finally, at the very back of one of the racks…an Emily! We had been waiting for that since Christmas! Budget went out the window, and I snatched it up.

And our daughter has been ecstatic ever since.

She now has all three of the female trains that are available in the line. That’s really cool. It’s sort of sad, though, too, because there are only three main female characters in the entire line. All those characters…three girls.

Until having a daughter was the best chaos that ever happened to me, I appreciated the importance of strong female characters in any story at an artistic level, and I thought that I understood it at a social level. Now, though, trying to see the world through her eyes…I really want her to have strong female role models. It’s taken on a different level of importance to me.

This has driven me to be even more irritated with both DC and Marvel studios for their lack of effort in giving a strong female superhero her own film. It’s not like they don’t have a lot to choose from. To Marvel’s credit, they have given the Black Widow increasing amounts of screen time, and she played an extremely important role in the Avengers, as well as taking the ultimate heroic action in Captain America: The Winter Soldier. Joss Whedon, of course, appreciates strong female characters.

The Black Widow, after all, has held excellent readership in her own limited series time and again in print comics. Hopefully, Lucy (assuming the film is what it promises to be) will prove that audiences will respond well to female heroes.

DC has even less excuse, and more of which to be ashamed. For all of their excellent print titles, they have yet to place Wonder Woman on the screen, although she apparently will have a small role in the upcoming Batman/Superman film.

I can’t wait to see the woman that our daughter grows into.

I really hope that she gets to see and read cool characters along the way.

2 thoughts on “Trains and Wonder Women”