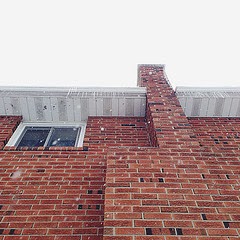 The trendy thing to do in Southern New Hampshire at the moment is to renovate old mill buildings and re-purpose them for homes and offices. Mill buildings are turned into apartments in the town where Karen and I live, and the largest city in the state has a riverfront of old mill buildings that have become university campuses, sport bars, shops, and offices of various shapes and colors. My day job is in one of these buildings, a cool, creative loft-space that offers a really nice view of the city. Construction is still ongoing in the adjacent building, and my lunch conversation with a colleague this week centered around watching the workers one floor below and one building over. Bricks were being chiseled out and hauled away by the dumpster full, and mention was made of the worth of those bricks in monetary terms.

I think there’s more worth to them than that. Something that you notice quickly if you transplant to New England is the age of the buildings. Things have been around a lot longer up here. That initially brings some headaches if you’re not accustomed to the differences in architecture (getting a bed frame up a flight of the notoriously narrow staircases of many homes here is a challenge of occasionally epic proportions), but it’s a good thing overall. There’s more character here. When I watched those workers haul bricks away by the wheel-barrow load to place onto a front-loader, I thought of the hands that would have initially carried those bricks, and carefully placed them together to form the building in which we stood, so many years later.

I grew up with a father who worked in a technological field, but whose love was crafting things from wood. He kept a fully-equipped workshop in a detached building, and escaped to it whenever he could. He carved shapes and built small structures, many with surprising usefulness, others for simple aesthetics, but all with the best craftsmanship of which he was capable. There are other woodworkers out there of much more skill, certainly, but he was quite good himself, and with no formal instruction. My father loved handling the wood. He enjoyed the feel of it. Watching his creative synergy happen with the shapes that he carved was inspiring.

My grandmother created with needle and thread. Quilting is an art that borders on extinction, and she left a legacy behind her that has helped others to know her. My father will leave his creations behind, as well, one day. My mother was a ceramic potter of sorts, and has gifted things to me that she has made. I sincerely hope that the words I’ve penned will be left for our daughter, because that’s something that she will be able to hold onto, something tangible that I created, as my father’s wooden sculptures and my grandmother’s quilts are to me.

As I’ve watched the workers carry away those bricks this week, I think of the history left behind by the workers who originally built the structures. It’s important to do good work, because the work we do is a gift, a legacy, to the culture as a whole. I doubt that the workers who built the building that houses my office originally were all happy about their labor. I also doubt that they could foresee the future of their labor. And, so it is with all of us, because all of us create in some capacity.

Whatever your craft, know that it carries a legacy, that it will be something that you leave behind for others as you practice it. Respect that.

And do good work.

2 thoughts on “Brick by Brick”