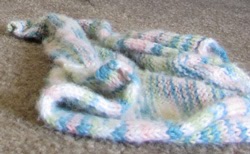 ‘Tis the season for…well, the season for stuff, all too often. This is the time of year, after all, in which we collect seemingly endless amounts of stuff. Often, I think that stuff is intended to be used as a coping skill. We cling to certain things, because they make us feel more comfortable, more safe in certain situations. When life becomes stressful or out of control, we find that item that makes us feel safe and hold onto it.

Not all stuff is needless accumulation, though. I’m reminded of that, as well, as I look around at our Christmas decorations. Our tree is decorated almost exclusively with ornaments from our past adventures, both in our life together and before we met, and it’s a very important and spiritual experience for me to reflect on that. I have a small porcelain Christmas tree that my mother gave to me as a gift when I was young, and this will be passed on to our daughter. It has no financial value to speak of, but a huge value in the fact that it reminds me of my mother and, as we age and she will eventually pass on, it will become even more valuable…I hope even to our daughter’s children.

While I don’t believe in accumulating stuff, I do think that it’s important to have and hold onto those sorts of important items in life. They serve as markers for us to focus on important things.

Our daughter started early in that regard.

When we were expecting, one of Karen’s co-workers knit a blanket for our daughter. The blanket had a pattern in it that equals 42, because we’re geeks and that, after all, is the answer to life, the universe, and everything. Karen thought it would be a really cool idea to have a second blanket, a sort of substitute in case the main blanket got dirty and needed washed, and her co-worker generously made a second, smaller version, this one without the special pattern, but otherwise a smaller duplicate of the first blanket.

Our daughter slept with them from the day she joined us, and they became her security. She clung to them as she learned to calm herself after being upset. They have affectionately become known as Tiny Blanky and Big Blanky. We developed a system: Big Blanky was the most important, so Tiny Blanky went on trips and outings, in case she needed to sleep in the car, but still keeping the primary Blanky safe at home.

The first time our daughter got really sick, she threw up on both of them in the same evening, and was up until the wee hours of the morning crying and unable to sleep because Blankies were absent as we washed and dried them for her.

Karen texted me at work one afternoon late this week. She had made a quick run to Ikea to return some odds and ends that we had purchased and decided we didn’t need (ironically, she was acting to prevent the accumulation of stuff). She was leaving the store when they discovered that Tiny Blanky was not with them. Re -tracing steps, talking to security, consulting with lost-and-found…all resulted in nothing.

Karen spoke of the sadness that she and our daughter talked through in the store, of how bravely our daughter handled the loss. It seems silly, to be so sad over a blanket, especially when Big Blanky is still safely at home for her to sleep with. But, Tiny Blanky had become a fixture, often in her hand as she walked here or there, requested frequently when out and about. Tiny Blanky, an inanimate object, had assumed a personality of sorts. Our daughter is sad, and told me so, but bravely moves on with life.

What’s really sad is that Karen and I sat around after our daughter was asleep for the night, and spoke of how depressed we both are that Tiny Blanky is gone. And while we hope we will be called by the store saying they’ve had a blanket turned in, and while I will make whatever time necessary in my schedule to get it if they do, we’ve moved to acceptance now. I’m much more aware of the need to keep track of Big Blanky, so that it can be kept for her and hopefully even held onto as an adult, so that she can remember the story. After all, Big Blanky was lovingly made and is one of a kind. It’s of great importance to our daughter, and thus of great importance to us. And I’m certain that it will continue to be in her hand as she explores the world.

The day Tiny Blanky was lost, though…that was a sad day for our family.

Tiny Blanky, thank you for all that you did. You will be missed.