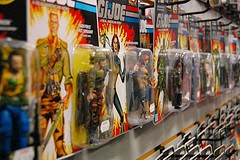 When I was young, I played with action figures. I had both a Transformers and a G.I. Joe collection that were quite impressive. And they weren’t the only ones: my geekier friends will remember the likes of M.A.S.K., and the Super Powers collection.

There was this room in our home that experienced multiple reincarnations during the course of my childhood. It was a den, it was a guest bedroom, it was other things here and there. At one point, it became the secret mountain headquarters for the G.I. Joe team. I filled most of the room with just the good guys. There was difficulty finding somewhere else in the house to put the bad guys.

It was a modest collection.

As I grew, I made a close friend with one of the neighbors. He was older than I was a by a few grade levels, and he won me over to the world of role playing games and other things that older kids do. One day, I was playing with some of my old toys having some of my usual imaginative adventures play out. Later, my older friend was visiting and commented on the toys still laying about. He was trying not to judge, but this just wasn’t the sort of thing that older kids did.

Last week I enjoyed the final of this year’s Reith lectures, which was about finding self-fulfillment through art. And while you might guess that, as powerful as I know art to be and as much as I love talking about it, I rolled my eyes at that title, there was an important point in the lecture about how we forget to play as children play, because that is what creativity and art are at their simplest impulse: play.

Life has a way of pushing us out of the playful mindset. All of that adult responsibility sort of stuff…working hard, staying late, dressing up for work every day. I’ve experienced my lot of that, especially over the last year (although I at least don’t have to dress up any more). Even when you have the opportunity to work in a creative profession, daily life is fraught with a specific set of resulting concerns that carry an overwhelmingly burdening load at times. It’s no wonder that our creativity suffers a blow from the constraints with which we deal.

And that’s to say nothing of the other aspects of a stressful but full life…say, having a two-year-old, for example.

Looking back on that evening years ago when my friend saw those toys laying around, my feelings of embarrassment regarding being found out were seriously misplaced. I should have been proud to have toys about, in the same way that I’m proud to wear comic book t-shirts now. It has nothing to do with being part of a subculture or being a geek. It has everything to do with remembering to play.

Because that’s such a very, very important part of life.