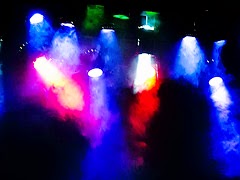 Sometimes I feel as though I’m glued to a computer screen way too much.

Now that I’ve changed careers for my day job, I spend most of my day in front of a computer writing code or designing page layouts. It’s fun, don’t get me wrong. But I lament (as does my back after several stationary hours) the loss of the chances to be more physically active that I used to have. I’m still involved in theatre, and this is a huge outlet for me to be physically active…something that I desperately need, now. Between those two things and trying to keep some kind…any kind…of writing rhythm, I stay incredibly busy.

And I continue to be amazed at how much everything is alike in so many ways.

I listened to an interview with a web designer several months ago. She, too, had worked in theatre before beginning a career in the web, so there was immediate common ground for me there. She likened scenic design to web design, and I’m inclined to agree with her. There’s a creative component and technical component to each. The scene designer begins with sketches for what the setting of the fictional world should look like. Then, logistical issues are considered. Models are built. Working construction drawings are made, and then the lumber and drills and saws come into play as the sketches begin to take shape. Everything I know about power tools I learned in a college scene shop. In my experience in the theatre, there is almost always a technical director who oversees the construction of what the designer envisioned. He or she works off the drawings the designer provides and handles the technical details of the building.

The web designer also begins with drawings, but of a digital variety. Wireframes and prototypes are built in software like Photoshop and result in a visual model of what the website will look like. A developer then takes those prototypes and begins writing the code that will build them for your browser.

I began my theatre experiences on the technical side. I spent a lot of time doing the technical work of implementing others’ designs. I did my share of designing, as well, but me and a sketchbook were awkward companions, at best. I do the same thing for the web. I do some design work, but generally only page layouts, not real graphics work. I spend a lot of my time coding what others have designed.

Another similarity is that the web has its own sort of rehearsal process. As I write this, I’m getting ready to move a big project to a testing server for a dry run of how it will work. This is only for a select few people…the world won’t see the site until we’re settled that everything works the way that we want. It’s the Internet’s version of a dress rehearsal. A tiny audience will preview what the real event will look like before the curtain goes up on opening night.

There are a lot of other similarities, as well, too many for one post, I think. Isn’t it so fascinating, though, how different disciplines are so much alike the more one gets to know them?