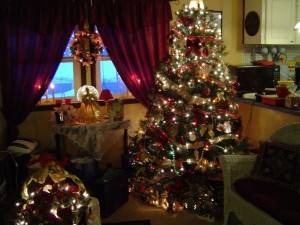 Our daughter is in that phase during which she fixates on something that she recognizes, and proceeds to identify it everywhere. Since we bought her first baby doll for her birthday gift a few months ago, she has began to point out “baby!” everywhere…and I mean everywhere…that she sees a baby. Be it real life, in photos, or as a doll, we now know the location of every image of a baby within the immediate vicinity. She was playing with a family member’s childrens’ nativity set last week, and, of course, zeroed in on the Christ child as “baby!” I then got to assist her in beginning to make the connection that Christ, too, was a “baby!” when He entered our history.

This event sort of collides with my obsession over superheroes and their mythology. And, before you unplug over the seeming disconnection between the two, I’ll say, partly to assist and partly in my defense, that, just as our daughter sees babies everywhere, I see connections to superhero stories everywhere. Christmas, viewed in the context of the Christian faith at least, is a superhero narrative in itself.

My interest in what it means to be a hero has driven a large part of my thought over the past year or so. It’s what I want to think about, and write about, and explore. In true Burkian fashion, it has become another lens through which I see life and faith and culture. When I started writing a novel to explore these themes, it became a bit of an obsession (of the good variety).

The reason that I see a superhero narrative in the Christmas story is because Christ is the prototype of a superhero, the perfect example of what our hero stories tell. A story of a great evil that we cannot hope to overcome on our own, that is certain to overwhelm us. A story of a situation that would otherwise be hopeless. A story of a Hero, who is bigger and more powerful than we are, and more powerful than the evil that threatens us, who swoops in and fights the fight that we cannot, winning a victory that we could not achieve on our own. A Hero that demonstrates the use of power for good, that exemplifies self-sacrifice, that gives us an example to look up to, something to which we can aspire.

That’s so important when we find that our own cultural identity is a villain, a monster of consumerism that rewards individual pleasure-seeking over the welfare of others. As much as we need rescued from the grip of such a creature, we need the direction of where to go after the rescue. We need to know someone is standing watch over us when the villains rear their heads again, because they will.

Christmas is part of the ultimate story of a superhero, who crashed to earth as a “baby!” and grew to stand for us in our darkest hour.

I hope that your Christmas is blessed this year.