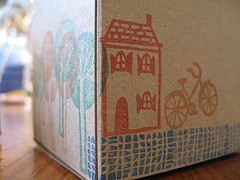 I’m sure you’ve either read or heard about the theory…I’d call it more than a theory…that most men are able to close off portions of their mental processes into various boxes or  compartments, which is how we’re able to stop thinking about work when at home and vice versa. Women are more holistically wired on the average, and everything is there all the time. That’s arguably a better arrangement, but leads to some difficulties in communication between the ladies and the gents at the end of the day.
Karen, recognizing this, was encouraging me this morning to create a new box in my head for important functions. She understands my psychology at this point. I’m working on it. It’s one of those moments when I think compartmentalizing is a good thing.
On a different note, though, I don’t think compartmentalization works in education. I haven’t talked about it here for a while, but I’m huge fan of interdisciplinary models of education, and I’m thrilled to see more universities launching programs in interdisciplinary studies as a push-back against the hyper-credentialed model of the professional world in which we currently exist, and by which we are currently limited.
When I think of how the pressure for the current model of compartmentalized disciplines that don’t talk to each other came about, I wonder if Cain’s concept of the “extrovert ideal” had something to do with it? She talks about how extroverts tend to be overly competitive, as well as brashly persuasive, and thus tend to end up in leadership roles more frequently. I think that introverts tend to be more introspective and less the fence-builders to prevent collaboration. I wonder, in fact (and I say this a bit selfishly as an introvert) if an introvert came up with this concept of interdisciplinarity.
Perhaps the reason we don’t talk between disciplines nearly as much as we should, is the same reason why we aren’t willing to talk amongst ourselves in polite discourse.
I love it when these ideas come together. It’s so…interdisciplinary…
Photo Attribution: lovlihood under Creative Commons