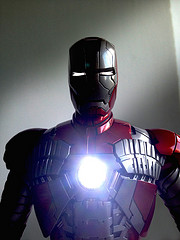 While I was blogging my way through a week of Avengers retrospectives, leading up to my review of the film last weekend, I realized an aspect of the nature of a hero that I had mentioned in nearly every post, but that I did not, for some reason, recognize as being it’s own component of this puzzle until the end of the series. How I missed it, I don’t know, but I can’t do justice to a discussion of the nature of a hero without giving this it’s own post.

Part of the nature of a hero is self-sacrifice.

I think that this comes in the motivation behind the desire to be a hero, or the desire to use the power that one has. The hero is motivated to use their power to help others against evil that would be otherwise unable to be defeated. The hero is willing to place their own well-being aside in order to help those around them. Villains or antiheroes make a different choice.

(Disclaimer: if you are one of the two people on the planet that haven’t seen the Avengers yet, you shouldn’t proceed due to a significant spoiler)

When Tony Stark assumes the identity of Iron Man in the cinematic version of his adventures, his motivations are complicated and mixed. After all, he declares on national television that the public can always count on him to “pleasure himself,” and reveals at least a part of his motivations in this statement. By the time he appears in the Avengers, he recognizes himself as the star of the show, so to speak. He sees himself as superior to all of the other heroes around him, and presumes to assume control of the situations that the group initially has to handle. By the end of the film, events have brought the group together as a team that is greater than the sum of its parts. Stark chooses to sacrifice himself in order to preserve the city and his fellow heroes, in a particularly poignant scene in which he attempts to call Pepper but is unable to reach her, leaving the audience to realize that he will die alone in another dimension, without having been able talk to the woman he loves a last time, in order to save a city of people that he largely doesn’t know.

Stark makes an interesting example of this aspect of the nature of a hero, because he arrives at this point through an evolution of his personality. What’s even more interesting is that the evolution occurs after Stark moves through other aspects of the nature of a hero. Maybe the manifestation of two or more aspects in one character will be the topic of another post in the future.

I think that this trait is critical in the evolution of a heroic character, and I’ll be taking a new look at my own characters to see if they measure up. The character of a hero somehow simply isn’t as heroic without, when arriving to save the day, the recognition that they will lay down their lives for those they are protecting if need be. I think that this is because most of us cannot motivate ourselves to be self-sacrificial for those we don’t know and love…and some cannot even get there for those that they do. For the hero to be self-sacrificial is for the hero to possess something that the rest of us cannot. Our heroes, after all, must be larger than life, otherwise they could not be our heroes.

And if that were the case, we wouldn’t need them as badly as we do.