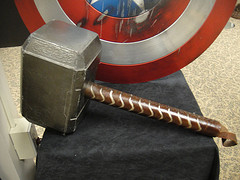 The series of my retrospectives before seeing the Avengers this weekend, along with my marathon geek-fest of movie watching this week, concludes with Captain America: The First Avenger.

For a more detailed synopsis, here’s what I wrote after first seeing the movie last summer. We know the story: Steve Rogers wants to be a soldier to fight in the war against the evil of the Nazi regime, but he can’t because of his physical ailments. After multiple denials, he is given a chance because of his courage to participate in an experimental “super soldier” program. The treatment he receives at the hands of Dr. Erskine transforms Rogers into a physical powerhouse with the abilities to enact his courage, and he ultimately becomes an icon of freedom, Captain America.

Rogers demonstrates as aspect of the nature of a hero that we haven’t seen in any of the Avengers to date: he epitomizes the fact that everyone, at some level, wants to be a hero. And, while the Red Skull is partially correct during their first encounter in saying that they are much alike, he is also missing a critical point: the Red Skull wanted the power bestowed by the super-soldier serum for his own gain. Rogers wanted the power to stop evil from overtaking the world. While the desire to be a hero may be driven by selfish motives as it universally occurs in the human experience, Rogers experienced this desire with nothing but purest of motives.

This characteristic is summarized by Erskine early in the film. The person who is born with great power often doesn’t respect it, because he didn’t have to work for it (as we saw with Thor).  The person who has to work for it understand and respects great power, and is capable of exercising it with compassion. Rogers has waited a good part of his adult life for the chance to be a hero, but he doesn’t view what he does as being a hero. He is merely performing what he sees as his duty, because (in his own words) he doesn’t have the right to do anything less. What is perhaps most heroic about Captain America is that he is, in his own perception, “just another kid from Brooklyn.”

That’s all of the retrospectives, and I’ve now watched all of the films in order to build up for this weekend. We have tickets reserved for the Avengers tomorrow afternoon, and I can’t wait to tell you my reactions! Have you seen the movie yet? Tell me what you thought (but no spoilers, please)!