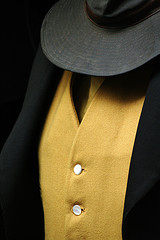 What do you think of when you think of the 1920’s and 1930’s in America? I think of what a lot of us would probably consider to be the marks of the essence of the era: classy dress, big band music, swinging jazz, and gangsters with tommy guns in violin cases. The image of the gangster with the wide-brimmed hat, in fact, continues to be the stereotypical image of the gangster today, pervasive in games like Mafia Wars, and influencing comic book villains. There’s something about the action of speak-easies and federal law enforcement trying to capture villains who have committed atrocities such as the St. Valentine’s Day Massacre that appeals to our storytelling.

Similarly, I remember my father’s fascination with Westerns. I grew up with episodes of Gunsmoke periodically looping in the background. The U.S. Marshal staring down the villain who was doing evil in his town, and ultimately winning in the street because he was the faster draw: That was my father’s idea of a good adventure.

Still today, I’m attracted to a certain amount of action in my escapist entertainment. For me, it’s espionage and spy stories, complete with their fair share of blowing up secret bases and foiling plans to take over the world. Or, just a good dose of come-uppance to the ethically depraved, as delivered ala Jason Bourne.

Yet, when I designed the set for a 1930’s noir style murder mystery show in college, the focus wasn’t on violence, but art deco and glamorous costumes. The entire show had no tommy guns or gangsters to be found, yet was as quintessential of the time period as any other production. Similarly, a tour of the International Spy Museum will tell you that the lives of spies are frequently quite without action, contrary to the assassinations and car chases portrayed in film. And, while the Wild West was wild, it was more so the wildness of the survival struggle between man and the elements, rather that pistols in the street at sunset.

My point is that, for some reason, we find the introduction of violence onto these stories and time periods to be addictive, even glamorous. Lives of daring adventure, in which one’s life might end at any turn, draws viewers and readers into the tale, although they are poor representations of historical accuracy. Which leads me to wonder: why is this sort of violence attractive to us?

In fact, any time I’m confronted with violence in storytelling that draws me into the story, I’m a bit amazed. I say that because, philosophically and theologically, I’m a pacifist. That is, I don’t think violence is ever a good answer to a problem. That being the case, why does it draw me into the movie theatre the same as any of my friends? I’d like to think that I’m not susceptible to this, but I obviously am.

Of course, my diet isn’t a steady intake of action films or James Bond novels. And, there is a point where too much is too much. I wonder if this attraction exists in Eastern cultures as much as it does in the West, or even if it is as pervasive in the rest of the West as it is in the U.S.?

Perhaps we’re all wanting the lifestyles of adventure that break us out of our day-to-day routines? Perhaps we all wish we were a bit more than we are. more heroic? In fact, maybe this plays into the nature of a hero somehow. I’d love to hear your thoughts.