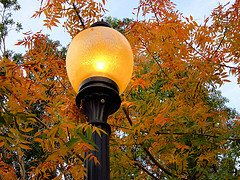 I never thought that I would admit something like this, or even that I would think something like this, but I’ve found myself enjoying Autumn. And when I say “enjoying,” I mean that its a bittersweet sort of thing. I still mourn the fact that my day has reached darkness by 5:00 p.m. As I drove through traffic at around 4:00 p.m. on Monday evening, though, I realized that I really love how the light falls across the streets. I love the way it catches the trees in its slant, casting very pronounced and distinct shadows that really don’t occur at any other point in the year. The beauty is even more distinctive in the way the light falls over, and is broken up by, the homes and buildings along the sides of the streets. There’s something that’s completed as a beautiful sunset has its light distinctly dance around both the trees that were created for us, and the homes and buildings that we’ve created.

I realized also Monday evening, as I stood in a department store waiting to pay for a rushed purchase that I was making while between points A and B, that there’s something about the way our lights meet the light that is falling from the sky. As darkness arrives more quickly, I feel a sort of warmth in the way signs and streetlights and even brake lights punctuate our evening commutes. The experience evokes memories of Christmas shopping and Holiday festivities. I’ve always been so focused on how much I detest being cold that I’ve noticed these things sparingly, and at times not at all, in years past.

I think that all of these things occurred to me because I took the time to notice the way that the light fell across the streets this evening. Even though I didn’t really slow down, as such, I did make the time to notice what was happening. I wouldn’t have normally paused enough to notice the lighting while driving to where I needed to be. The curse of our busyness and supposed productivity…the burden of our ability to always be productive as we are mobile…is that we frequently move past these beautiful marks of the seasons that are given to us, I believe, as gifts. We miss the way our own advancements are cast in a different light because of the way the light from a sunset falls across them.

I heard someone talking about the physics of light this week. Perhaps because I’m used to seeing light depicted as rays or beams in comic books so frequently, I found this as a sort of revelation of the obvious, but the principal (and that’s probably the wrong word) is that we don’t see light, but rather we see everything else because of the light. The light reveals things to our attention. From that perspective, then, I didn’t really see the way the light fell across things this week. Rather, I saw everything else in a different way because it was illuminated in a different way…that is, revealed to me in a different way, almost like using theatrical lighting to point an audience’s attention to a different part of the stage. I would hate to think that I wouldn’t have noticed that, just because I didn’t take the time to notice.