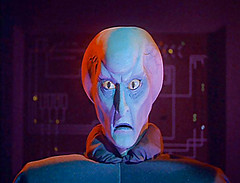 So, I’m apparently on a “write about super heroes and science fiction” trend.

As family keeps arriving to visit the new baby, there are many movies to be watched during baby’s nap times. And, because I have the coolest extended family ever, Dr. Who is, of course, an obvious choice for said movies. Specifically, this week we voted for classic Dr. Who movies with Tom Baker as the Doctor. Of course, such classic films from the 70’s bring about comedic commentary on what a colleague referred to as “cheesy” special effects…in this case, a giant alien grasshopper-looking creature and a metamorphosing man who’s green alien appendage looked suspiciously like colored bubble wrap.

I was reminded of another science fiction program to which I held long term loyalty (and occasionally enjoy re-watching), Farscape. Farscape preceded widespread use of computer generated effects by some time. I have especially fond memories of watching new episodes in my old bachelor apartment in my first days of life-after-college. The series, produced by Jim Henson Productions, featured puppet-style aliens that were quite impressive. Of course, modern make-up had long produced outstanding aliens in series such as Star Trek: The Next Generation or Star Trek: Deep Space Nine. This was because this type of creative make-up and building of puppets was the norm at that time, and those who practiced the art were quite good.

During my theatrical adventures, I’ve worked with some amazing make-up artists. I’ve been aged and made younger. I’ve had a gruesomely realistic rope burn placed on my neck when I played a character who had returned from the dead after being hanged. There’s something really special about the kinesthetic process of building special make-up effects, puppets, and masks. I loved that this art translated so beautifully to the screen, as well as the stage.

And, today, I just don’t see it any more, or at least not as prominently. There are now science-fiction programs featuring completely computer generated characters and backgrounds, in which the actors film almost exclusively in front of a green screen. I admire the ability of the actors to do this. I miss, though, the artistry of the puppets and amazing make-up effects used to create alien races and all manner of wild visuals. I respect the skill of the animators and graphic artists, don’t get me wrong. Tron remains, in my opinion, one of the greatest artistic achievements of our age. Digital artists are of just as amazing a talent as make-up and costume artists, and I find it particularly beautiful when all of these disciplines work together.

I just miss the exclusivity of the puppet-building, make-up brush-wielding, alien creators of science-fiction programming of yesterday. Call it nostalgia. Call it old-school. There was just something about those giant puppet aliens. Don’t you think?