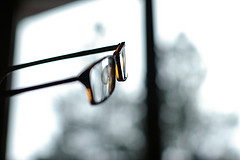 Like a great many of my epiphanies, it came to me while watching Dr. Who. Something that the Doctor has done frequently, and especially is seasons 5

, is to cause normal people whose paths he crosses to question if there is something bigger that they should be doing with their lives…something more consequential.

I guess this resonates with me because, even though I recognize it as a bit of a trap, I’m easily caught in thoughts of “shouldn’t I be doing something more than this?” That is, am I so caught up in the minutiae of the day-to-day as I try to get through my schedule and accomplish my to-do lists, that I miss a larger point…something else that should be grabbing my attention?

Now, don’t get me wrong. I have no illusion that I’m somehow destined to be some sort of profound, prophetic voice that cries out for a change that will prove life-altering for my culture. I’m not nearly that narcissistic. I don’t even hold any pretense that I’ll write a great American novel…perhaps not even a great one. I do think, though, that I have something to contribute. Perhaps I only think that because a professor in my undergrad gave me that encouragement, but I think that its true in any case. And, given that, I find it difficult to recognize that I’m contributing in any way that’s worth noticing. I feel like I’m missing the forest for the proverbial trees.

Of course, if its the grand scheme of my life that I’m concerning myself with, and I’m concerned that I’m spending too much time in the day-to-day, then I must also realize that the grand scheme is made up of the day-to-day. That is, I don’t want to miss the forest for the trees, but I have to understand that without the trees, there would be no forest. I can’t stop paying attention to daily life altogether.

It occurs to me that, even those who did alter the way in which we think and believe, didn’t achieve their status as cultural (re)formers while they were alive in most cases. Many a great author has been considered great only posthumously, and even more great artists. When you begin to think in realms such as politics, the odds of your contributions being fully recognized during your career or lifetime are even more remote.

Still, its just as dangerous to fall into the opposite trap…to be unable to see yourself as anything other than just a cog in the machine. The trouble with being completely absorbed in the daily logistics of life is that we can miss the fact that there is a reality beyond what we can empirically verify. To miss that is to miss the “why” for the “what.”

I’m not delving into destiny here. I’m not going to the “how,” because that’s an entirely different conversation. I will say, though, that those who contribute, at whatever level, to the greater scientific, artistic, political, or human good, do so through the context of their daily lives. The forest is better for their individual trees, and we are more than just the sum of our parts. I’m just working to not get so lost in the mundane that I forget to recognize that there might just be some of the spectacular here, as well.

Today is almost finished, friends. Here’s to what you have to contribute…by way of tomorrow.