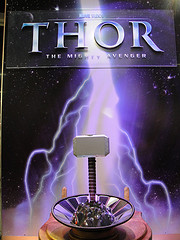 Try to hide your surprise at this revelation.

When I saw the trailer for Thor, my initial reaction was that it looked really sharp. The plot? I figured it could go in either a really good, or a really bad, direction. My weekend was made very happy by the fact that the former was true.

From an acting perspective, the major actors all turned in excellent performances. Chris Hemsworth captured the character of the cocky immortal who needs to learn his lesson well, and I was impressed with his physical mastery of the character and the fact that he brought a good range to the performance. I have no recollection of Hemsworth from Star Trek or his other work, so this was essentially his debut performance for me. I was impressed.

I found myself equally impressed with Natalie Portman’s performance. While she perhaps didn’t bring as much range to her performance as Hemsworth, she breathed life into her scenes with fantastic facial expressions, which are a tell-tale sign of good acting. This was a pleasant surprise for me, because casting Portman opposite any actor playing Thor seemed a remarkably odd choice at first blush. The screenwriters, of course, took some liberties with Portman’s character, Jane Foster, but this should ultimately be expected with film adaptations, and will be a problem only for the most devout of comic book purists. Even then, the chemistry between the two actors will likely salvage any contrarian opinion.

From a plot perspective, the story stays true to Marvel’s immortal character who is modeled after the thunder god of Norse mythology. His reckless love of warfare finds him unfit to inherit his father’s Asgardian throne, and places him in the position to uncover his brother, Loki’s, nefarious plots, while he grows as a person (helped along, of course, by Jane Foster). Character development runs light in Thor, but the viewer doesn’t miss it so much because this is epic, sweeping story telling, of the sort that is all about plot and little about characterization. In short, this film isn’t meant to develop deep characters, it is meant to introduce the audience to an epic hero.

And, in that, it is successful. The lead-in to the upcoming Avengers film is quite blatant, and certainly left me wanting more. Long-term comics fans will like to know that the movie also briefly introduces Hawkeye…just enough to get you interested, of course (and the child in the row in front of me asking his father, “When’s Hawkeye coming back?” made the moment for me, in any case). I found interesting that the end credits close with the proclamation that “Thor will Return in the Avengers,” sort of reminiscent of the old James Bond films.

The epic, sweeping storytelling is, of course, a visual feast. Nothing pleases a comic book fan more than when the super-hero on the screen looks like the super-hero on the page, and, in that regard, Hemsworth could not have been cast, or costumed, better. My only hesitation is that Mjolnir is designed perhaps a bit too much like the image from the page, because it felt like a prop at times, almost breaking the illusion. This especially occurred when others attempted in vain to lift the hammer, and I found myself thinking, “it looks like cardboard.” The only other significant visual discrepancy I found was the semi-Celtic design left in the ground when Asgardians arrive in our realm. The design has no explanation, other than to look interesting. I suppose that, if that was its only purpose, it succeeded.

These minor issues notwithstanding, the combat sequences were well choreographed but not overbearing, and the balance between live action and CG was superb and without distinction as you watch the film. In fact, I would say the action sequences featuring Thor in battle are visually perfect, complete with the spinning hammer and slinging, hammer-propelled flight. In this, you won’t be disappointed.

The finishing touch on this particular super-hero film is that parents will not feel uncomfortable taking their children for any reason. There is, in my mind, absolutely no objectionable content here for parents to concern themselves about, and that is important for a film about a mainstream super-hero such as this.  Important, and a delicate balance to strike if the film is to do the character justice.

Thor opened this weekend. If you grew up loving Marvel comics, as I did, or if you have just recently become enamored with their films or publications, you’ll want to see this movie. Certainly, it is one of Marvel’s best film adaptations to date.