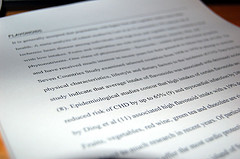 I remember my first graduate course. Specifically, I remember looking though the pages and pages of the syllabus until I reached the term paper assignment. I think most former grad students remember that moment. It’s traumatic, after all. My eyes grew wide and my complexion grew pale as I familiarized myself with the requirements of that one assignment, one of many. I remember well the sentence on the syllabus that said  “…qualities valued will include brevity…” How exactly does one achieve brevity in a paper that size? The point was that the professor wouldn’t tolerate any padding or fluff. Every idea and point of that paper had to stand on its own, and there had to be enough of them to make the work cohesive.

Well, I passed. Ever since, though, the word “brevity” has been etched into my brain. It sprang to mind again when I read this op-ed piece over the weekend, in which the writer argues for using shorter (much shorter) writing assignments for his undergraduate English students. He uses the word “concise” instead of “brevity,” but he’s arguing for something similar to my first semester grad school professor. Cut the cliche, cut the filler, and give the facts. Only important material should be in the paper. After all, the writer argues, we live in a culture that values the ability to succinctly communicate your thoughts in a few words. We don’t have time for essays in our day to day lives.

My fellow blogger Jan over at The View From Her asked this week if anyone else was growing “bored with the whole blog thing,” pondering if ideas weren’t communicated that way any more, or at least that most of us didn’t have the energy to say them in that format. This isn’t the first time I’ve heard the question asked. Is blogging dying? Certainly the blogosphere looks different, and is arguably less active, in our current culture of frequent status updates and 140-character sound bytes. Remember when Facebook wasn’t a real-time stream, but a place to communicate with your friends (before it attempted to copy Twitter)? Many have left blogging behind, preferring the quicker stream-of-consciousness that is the status update world. Quick and concise thoughts, without the elaboration.

I’m concerned by this. My initial reaction is that blogging is too valuable a medium to let die, both as a snapshot of the thoughts of the masses and as a game-changer for journalism. Sure, there are bloggers who just write about what they did that day and ate for dinner, the same as there are vloggers that waste YouTube’s bandwidth talking about their haircut. Those, I think, have gravitated much more easily to shorter mediums. There are many, though, who have something to say, something that requires more words to effectively communicate their thoughts.

We’ve all read books and reached the last page groaning about the verbose writing of the author…you know, the writers who take pages of non-fiction space to say what we could have said completely in three paragraphs? That’s one thing. And as much as I love the idea of every thought standing on its own merit, there has to be room for the complete thoughts, as well. I’ve heard it said that, in prose writing, every thought must stand on its own, while in poetry, every word must stand on its own.

Perhaps, if we were moving more toward the poetry, I could more easily accept the idea. Even if we were, though, embracing poetry doesn’t eliminate the need for prose. And, at the end of the day, we’re not embracing any sort of increasing literacy…a fact that is glaring us in the face every time someone uses “2” instead of “to” or “lol” in a tweet (those abbreviations barely even have a place in text messages in an age when many phones have full keyboards).  Not everything can be abbreviated effectively, and doing so not only robs the idea of some of its coherence, but works toward the degradation of the language in which the thought is being expressed.

I think of my professional life as an example. I don’t look good on paper, at least not when I’m reduced to a few succinct sentences. Given a seven page CV, I shine, but on a one page resume, not as much. There’s more nuance, more complexity, to anyone’s life than that. Should I find myself applying for a specific position that requires a specific skill set, then that can certainly be achieved in one page. There is much, though, that must be left out, and those things that are left out are important.

Expressing something in its entirety does not mean expressing it verbosely.

Expressing something while valuing brevity does not mean reducing it to a rapid-fire tweets, either.

Should blogging actually be dying, then I think its death is a statement that we aren’t wise enough to recognize the difference.

3 thoughts on “Abbreviating Ourselves to Death”