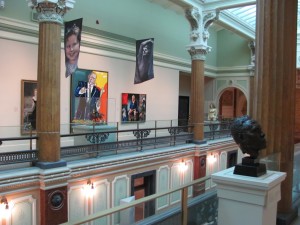 When Karen and I moved into our new apartment, two friends, both of whom are artists, each gave us one of their pieces as housewarming gifts. One is a sort porcelain and ribbon piece, the other a painting. I love having these pieces on our walls, in our living room and dining room respectively, not just because I like the work, but because these are a part of our friends.

The painting in the dining room was a favorite of mine by the painter, and I had spoken of it so frequently during visits to his studio that he gave it to me. The painting would have sold for a few hundred dollars, I’m sure, but he gave it to me, simply from one friend to another.

My end of the family and Karen’s end of the family have very different Christmas traditions. On my end of the family, you make a list available of what you really want, and people buy you things from that list. On Karen’s end, you have to be surprised, or it isn’t a gift. This year, she made arrangements with the same friend whose painting was a housewarming gift, and purchased two more paintings in a series that I had really liked on recent visits to his studio. I was very happy to have purchased work from our friend.

Still, with three of his paintings now proudly on our walls, I wonder, do we own that art? The traditional, materialist, capitalist view we’ve been taught tells us that we purchased those last two pieces with our hard earned money, so they’re ours. But, are they more ours than the first painting that was a gift to us? Is it possible to own art at all?

I recently watched a documentary called The Art of the Steal

, which chronicles the conspiracy to relocate the Barnes collection in Philadelphia. Should you find yourself inclined to watch the movie, listen to the prices quoted for some of the individual pieces in the collection, or the collection as a whole. They’re big. Like, national-debt sort of big. How do priceless works of art end up with a monetary value attached to them? Who formulates these numbers? If I pay millions of dollars (a pipe dream, but stay with me) for, say, a Monet, would that make that piece of art mine? Is it a possession? Does it diminish the piece to think of it that way, to make it something to be bought and sold? Certainly, many colleges and universities who are struggling financially have recently felt it was acceptable to auction off artwork in their collections to pay the bills.

If we work under the assumption that one creative act is as valid as another, then stop to consider graffiti:

When a graffiti artists paints his work on a train overpass or an abandoned wall, does anyone own that work? What if we thought of it as a gift to a city at large? A temporary gift, at that, as it will certainly be painted over within weeks. What about the scenic design of a play? After a two week run, the set is destroyed to make room for the next show. Did the designer own that set? Or is it a gift to the audience?

I’m concerned about the way in which we think about art, the manner in which we attempt to commodify it. The culture of record labels and publishers and art dealers perpetuate this seemingly forever, and, in media parlance, art and images and books and music are now collectively reduced to the term “content.” They are something that we “consume,” not engage. Certainly not something we view as a gift.

I’ve mused here before that, perhaps, the only way in which an artist can be true to his or her craft is to not make a living doing it. Conversely, I’ve also spoken of how maddening it is to have your creativity sucked out by a day job and then try to find one precious hour each day to sit down and write, or paint, or compose. Someone once said that the only thing worse than having a job is not having a job.

As we struggle in the same way generations before us have to pay the rent while being creative, we ultimately have to find a way to earn something for our creativity, whether it’s selling a paining or an MP3 or placing ads in a blog. That’s ultimately never enough, and so the arts have historically existed primarily on the generous funding of patrons. In order to exist this way, I suppose it’s a natural outcome that the art be viewed as a commodity, as something to be bought and sold. And, thus, it is something that is reduced to a price.

2 thoughts on “The Pricetags of Paintings”