There are moments when I don’t believe that “ADHD” exists.

Truly, I don’t. I tend to suspect that it is either a label we’ve created to excuse certain behaviors, to provide an excuse to “treat” normal behaviors that we prefer to not deal with, or (at my conspiracy theorist best) an invention of pharmaceutical manufacturers so that they have a lucrative method of treatment to market. All of these make sense to me depending on the timing: “It’s not your fault, you have a disorder” makes us more comfortable, “Tired of dealing with your child? Perhaps he has a disorder” excuses poor parenting, and “Difficulty dealing with your hyper-intense lifestyle? We have a pill for that!” makes unscrupulous people very wealthy. The times when I acknowledge the possibility of its existence, however, I recognize that it’s a demon of our own design. We’re attempting to discover ways to slay the dragon that we just might have created for ourselves.

Walk with me, if you’re not unduly disturbed, into my odd fascination with the profession of law enforcement.  Mostly, I’m fascinated with the field because of their cool vehicles and toys. Decades ago (and less than that, I believe, in European countries…perhaps still in other parts of the globe), a single spinning blue bubble atop a vehicle in our rearview grabbed our attention, alerting us that we needed to stop to let an emergency responder by, or perhaps answer for our disregard of the white sign warning of “55” (all too often the latter in my post-college days). Today, emergency vehicles utilize million-candlepower LED lights that flare with so much warning power that they can be seen for blocks. 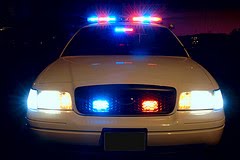 Why do emergency responders require so much more illuminating efforts to gain our attention? One of my theories is that there is so much more ambient noise. Driving down a local street a few days ago, I passed two garish digital displays, one on either side of the street, grabbing the attention of motorists and directing it to the businesses using them, along with displaying the weather and various other information. Of course, this must be identified and digested by your brain along with the podcast you’re listening to, the text message you have just received (of course you wouldn’t do that behind the wheel!), and the directions that the sexy British voice on your GPS is giving you about your upcoming turn (or is that just me?) As our over-stimulation increases, the amount of stimuli required to acquire our attention from the rest of the landscape increases proportionately. The more urban the area, the “louder” the landscape.

As I have consciously attempted to balance my affinity for technology with space for quiet and contemplation during grad school and beyond, this article in the New York Times certainly leapt out from the landscape. I have actually begun to notice my ability to initially focus on a novel without my attention drifting to be on the decline. Eventually, I become drawn into the story, but my initial focus is more easily interrupted.

Will this be similar to the hearing loss I’ve experienced from too many concerts? I mean, that I’ve lost attention span, and can only work with what I have left, as the Times article claims? That’s disturbing to me. What to do? I intentionally avoid “push” services for email and tweets and so forth: I want to know the information when I want to know it, but I don’t want it to come to me.

Have we lapsed into the role of serving our technology instead of the technology serving us? Perhaps we’ve received one too many treatments? If we have, what alternatives do we have to minimize the damage? Let me know: in what ways do you streamline the information?

Or should we just take a pill for that?