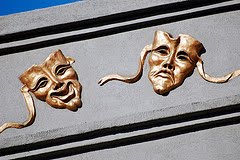 As I recently alluded to in recounting my sonnet-writing adventure, I’ve had difficulty making up my mind at times.

The fact that we are largely the sum of our experiences is a basic fact with which I don’t think most of us would argue. What we have experienced makes us who we are today. Some attribute this to chance, some to providence or the guidance of the Divine, but I think we would all agree that the end result is the same. Which makes it remarkable to me that I just didn’t get it for so long.

When I finished my bachelor’s degree and became professionally engaged in the behavioral health field, I threw myself into that field, feeling that I had to forsake previous experience at worst, or relegate it to the status of a hobby at best. While making what I thought at the time would be my career in psychology, I still wrote and did things like designing special effects for a haunted house Halloween fundraiser for a local youth center to give myself creative outlets. At the end of the day though, I struggled with seeing myself holistically, feeling at times that I had wasted years and becoming frustrated that I felt I was always distracted by this or that, constantly being drawn into something new that interested me and immersing myself in the world of some new discipline.

Then I had an epiphany (I mention those a lot here, don’t I?). I had moved to the city in which we currently live to begin grad school. I was hanging decorations in my new apartment, attempting to decide what of the life I had brought with me in disarray merited a position of honor on my bedroom wall. One of the items I chose was a set of porcelain theatre masks that I had collected during my undergrad days. I think it was then that I realized that the days of my college years didn’t have to be just a part of my past that I remembered fondly, but should also be recognized as a very important part of who I was, and who I am. Sort of like playing an album that you haven’t listed to for years, and finding that you still remember all of the lyrics.

Today I was contacting former professors to arrange letters of reference for a doctoral program application. I ended up exchanging emails with one of my favorite professors from my undergrad days, and it was great to re-connect. That sparked my looking at photos and recalling that formative period of my life, something to which I seem be given much more frequently in the last three years or so. I’m remiss in keeping in touch with those who have been influential in my life, and these transitional periods have a way of bringing us back into contact with each other.

I know I’ve frustrated and bemused many people through the last few years, seeming to be the one who couldn’t make up his mind, who was involved in one of several disciplines at any given time, and who would never decide what he wanted to be when he grew up.

In fact, I think that those experiences are finally combining to make something fascinating, because I’ve found the point at which all of these disciplines intersect to be far more interesting than any one discipline in itself. I can hear someone joking that “interdisciplinary” is just a word for someone who can’t make up their mind, but I think that it’s actually a quite necessary exploration. I think that individuals are cast in artificially compartmentalized roles because our culture doesn’t permit them to explore what they do through the lens of another interest. I’ve discovered that theatre and therapy work together beautifully, and theology and theatre, and poetry and mass communication. All this time I’ve been placing parts of myself into a corner, not realizing that all the parts of myself would play so nicely together, because I couldn’t immediately see how they would interact.

I sincerely hope, however, that I’m going to spend the next few years discovering how.