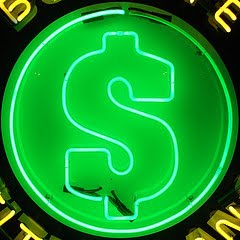 I’ll always remember him as the sort of “everyman” office worker of yesteryear that had his own name applied to the title of the show. That sort of thing makes you unforgettable. Drew Carey brought many laughs my way, and I’m sure your way as well, with his comedic television ventures, and, while I no longer subscribe to the dinosaur that is cable television, it is my understanding that Carey now hosts The Price Is Right.

What drew my attention to Drew of late, however, was his promise that, if he gained one million followers on Twitter within a specified time frame, that he would donate $1 million dollars to Lance Armstrong’s LIVESTRONG Foundation. I followed him…why not? LIVESTRONG is certainly a worthy cause, and if someone is going to donate such a significant amount of money to a worthy charity, then I’m all for helping it happen.

There’s just one little thing, though, that, as you might have guessed, troubles me.

I suppose its the same premise that troubles me with ventures like Product Red, that a portion of the proceeds from the purchases of anything from clothing to coffee to cell phones goes to AIDS relief for African countries. Again, I’m all for purchasing products with Red designations in order to be of financial benefit to very worthwhile charities. I think it noble that organizations are willing to further awareness and contribute to being part of the solution to a problem that robs others of quality of life.

My problem, however, remains, and it is this: why can’t they just do it?

If someone has $1 million dollars, and is inclined to donate this amount of money to a worthwhile charity, why place conditions on that donation? Is it to provide a way out, the potential that they won’t have to actually part with the money…sort of like when you consider taking part of your Christmas bonus and spending it on that new (fill in the blank) as a gift for yourself? Why can’t an organization or an individual simply make the donation, getting the needed financing for these worthwhile causes into play sooner? Make it public and noisy, if it is publicity for the cause that you seek, but I fear that, instead, it is publicity for one’s self.

We love our stuff so much. We equate our financial success with our perceived security in life. Even when giving to others, we desire recognition for doing so. In short, we find it next to impossible to be actually and fully concerned for the well-being of others unless there’s something in it for us, be it profit or popularity.

I wonder if we would even need these charities if all of us were to suddenly find ourselves with the Divinely-given capability to place the needs of others before our own, to place fellow humans before our profit?

Being too pessimistic to think that will happen, I’ll follow Carey on Twitter, and I’m sure I’ll buy more Red products in the future, as well. I just really wish that we didn’t have to.